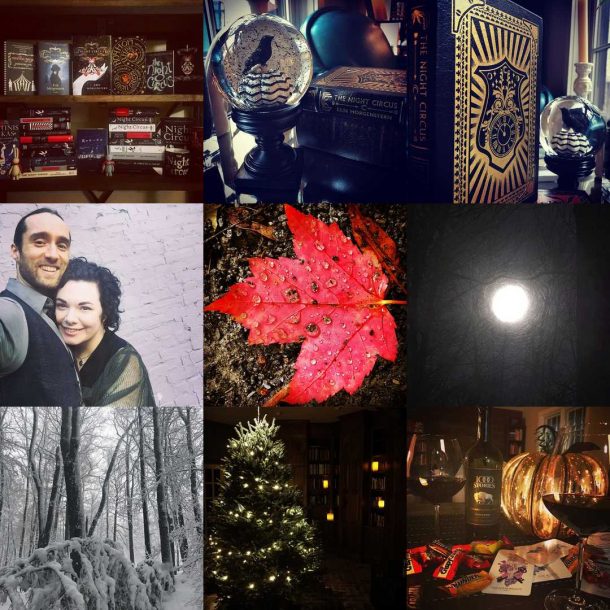 This was a year.

Good things first: I have a house. More than just a house I have a space that is mine and a place that is ours and I am such an introvert homebody Cancerian moon child that this brings me a good deal of joy.

Also within that house I am currently sitting in my new office which was supposed to be finished in October and it was not. It’s still not, but it’s finished enough for me to start moving my boxes and my books and my statues of bunnies into.

I finished a draft of the new book. I think I’m going to change the vast majority of it, but hey, it’s a draft. It still counts.

I drank a lot of sparkling wine with several truly lovely people and I turned 38 years old and celebrated my 2nd wedding anniversary and I ran around in the snow in my own yard in October when we got the first of what appears to be quite a lot of snow.

There were some good things.

And there were a lot of other things.

I feel like I don’t have words for things a lot of the time which makes me feel like a failure as a writer but I just don’t. The words aren’t there, not for blogs or tweets, not the right ones to capture the gamut of emotions from disappointment to anger to sadness to fear that seem to be on constant rotation this year in no particular order.

That’s not the way my brain works. I can’t say how I’m feeling or react to the world in the moment because combinations of 26 letters never sound right the first time, in the sharpness of the here and now. I’m a rewriter more than I’m a writer. I have to keep trying until I get it right. So my words for this emotional storm cloud of a year are going to slowly find their ways into fiction instead.

The world feels different now, or maybe it’s that the world is not yet the place I had wanted to believe it already was. I feel different now and so the book needs to be different, too.  Maybe that’s why I’ve been having so much trouble with it, because it is and always was a book that was somewhere in the future and things are different now and it had to wait for me to catch up to it.

Maybe I’m at the place in space and time this story needs me to be in, finally.

I don’t know yet. I’m still figuring it out.

I do know it is a winter book, though, so it helps to be covered in snow.

And I do have a lot of snow. 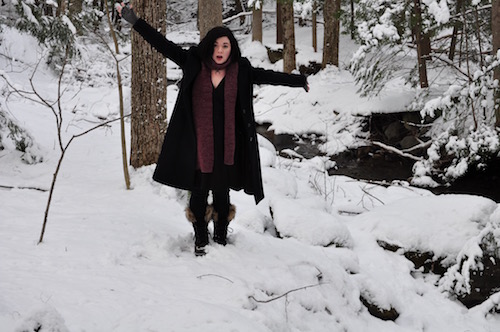 Two end of 2016 thoughts that probably would have been tweets if I were on Twitter more:

A request of sorts:

I turned off my website email because I can’t keep up. I know there are technically other ways on the internet to attempt to reach me but I can’t keep up with Tumblr/Instagram/etc messages either. Especially when they’re often flooded with people asking google-able questions about The Night Circus that seem to be part of homework assignments? Google is your friend. I would like to be friendly, too, but I only have so much time and even less energy.

Please be patient with me. The last few years have been really, really hard. Not just this one. Trying to write a book in the middle of all of it has been hard. I am doing better than I was while also realizing I had not been doing nearly as well as I had thought I was before. I am trying to be patient with myself, too.

I have to get where I’m going one step at a time and I have no idea how many steps there are.

That was a metaphor about how I can’t tell you when this book is going to be out because I don’t know when it’s going to be finished, and trust me, you won’t want to read it until it’s finished. It wouldn’t have an ending for one thing, and there would be pages missing in the middle and then the bees might get out and oh, now I’ve said too much. 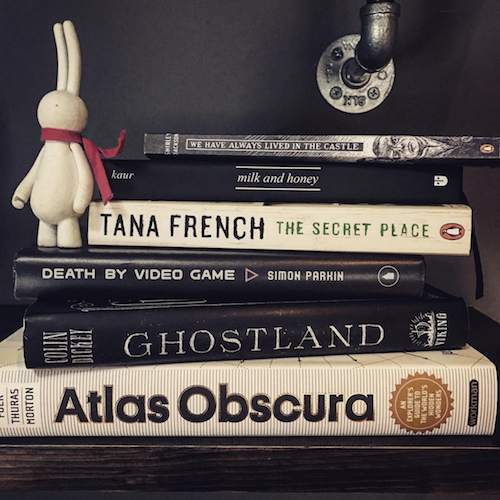 We Have Always Lived in the Castle – Shirley Jackson

I had somehow managed to never read this until now and I regret it immensely. Easily a new very favorite. Such pitch-perfect voice and tone and everything. I recently picked up the new Shirley Jackson biography by Ruth Franklin & I’m looking forward to that, too.

I’ve been trying to read more poetry lately and this volume is brimming with tiny, truth-stuffed gems. (Though I admit my favorite part of this particular edition is the forward that begins with “i don’t feel like the girl who wrote milk and honey anymore” because oh, I feel that feeling.)

I adore Tana French and when I saw she had a new book out this year (The Trespasser) I realized I was behind so I read The Secret Place to catch up. It might very well be my favorite of the bunch so far. The structure is brilliant and it nails a particular teenage girl-ness that I haven’t seen done so well before. Any Tana French is my go-to detective/crime recommendation lately.

This is an excellent book about games & gaming that is not quite as dire as the title might suggest. I read bits of it aloud to Adam in the car this summer while we were waiting for our movie to start at the drive-in theatre, an environment that sharpened the observation that video games are still such a comparatively young art form. (I read several different books on gaming/game history this year and this was my favorite.)

I’m not even finished with this one yet but it has to go on the bests list. It’s what you might expect from the title and more: a thoughtful look at the stories behind the ghosts and the times/places that created them. I have a thing for haunted spaces and I’m learning things that I didn’t know about places that I’d already been aware of and finding out about new ones. (Also I used to live within walking distance of the Haunted Place in Chapter 1.)

I have loved Atlas Obscura via the internet for ages and now I get to have them on my coffee table and it is delicious. Perfect book for opening to a random page and learning something nifty. Here, I’ll find a random one for you, and I really did just flip the book open to see what came up, bibliomancy style: Page 333. Cincinnati’s Lost Subway. Apparently there is an never completed subway system beneath Cincinnati. (Aside to the bibliomancy gods: I see what you did there.)

Preface because I’m not sure I’ve mentioned this before: we currently have something like five different game systems in our house but the PS4 is the go-to. It is my favorite, to the point where the dulcet tones of the home screen might very well be my Proust questionnaire answer for “What sound or noise do you love?” (but in a three-way tie with the crackling sound of a spoon breaking into a crème brûlée and also Nick Offerman’s giggle).

If you are not a game person but you are a book person or a story person please give Firewatch a try. It is beautiful and thoughtful and funny and touching and I still think about it months and months after first playing it. It’s not challenging and it’s not very long and it feels like a playable story. I might replay it next year. I never did find that turtle.

We haven’t finished Rise of the Tomb Raider yet but I love it, especially the way it does this turn-a-corner-and-see-something-amazing thing with the environments. I’m a sucker for a good exploration game and I like puzzles and while I liked the previous Tomb Raider a lot so far this one is balancing its different elements a little better. Looking forward to playing more of it.

I have been escaping into remastered Skyrim since November. I played the original back when it came out and the remaster is gorgeous. It has been kind of meditative, taking long meandering walks from Solitude to Riften and throwing fireballs at the occasional mudcrab. Meditative and therapeutic. And it allows me to say things aloud like “Why do these vampires have so many cabbages?”

Arrival was probably my favorite thing I saw in the theatre this year and I was delighted to find the Ted Chiang short story it was based on in Adam’s extensive SFF collection when we got home.

I don’t have cable or internet right now so I don’t really get to watch TV.  Sometimes I’m sad about it. Mostly I’m not.

(I did enjoy Stranger Things even though I had some issues with it. Dustin is my favorite because of course he is.)

(Every year I do this it becomes more and more obvious that I am a books/games/music person more than I am a movies/tv person.)

I always pick a song of the year and I had too many to choose from this year, too many tracks on repeat (Bon Iver’s “33 ‘GOD’” & Sia’s “Alive” & Kaleo’s “Way Down We Go”) and then I thought about how I always post a video to go with my now traditional New Year’s Eve blog and this came to mind and is another one of those songs I listened to over and over again and the first time I saw this video for it I couldn’t stop smiling.

I think that’s probably a good thing to say goodbye to this year with.

These are our Honorable Mentions for the @vintagea

Tremendous thanks to everyone who participated in