on perspective and cute batties 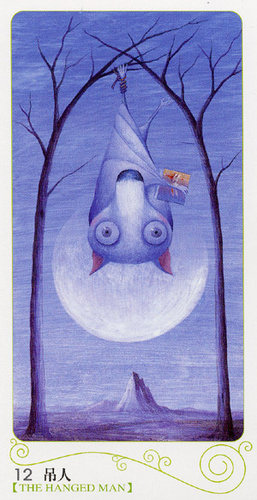 I am completely smitten with the Tarot of the Magical Forest.

I don’t often go looking for new tarot decks. I have about, um, twenty or so. I think. I haven’t counted them in awhile. Most of them are in a hatbox but there are others tucked on bookshelves here and there.

I am extremely picky about my tarot decks. I gravitate toward interesting yet consistent art and I like decks that have their own personality but still have recognizable traditional imagery.

And I’m a sucker for something whimsical.

So I don’t know how the Tarot of the Magical Forest stayed under my radar for so long, because I instantly adored it. The Hanged Man batty is particularly fabulous, mostly because it’s so appropriate.

The Hanged Man is one of my favorite cards in any deck, it’s odd and perplexing and so much of it is about perspective. It always reminds me of Odin on Yggdrasil. Sacrifice for insight.

(It also reminds me of the desk-standing from Dead Poets Society, because my tarot-reading influences are many and varied.)

I’ve been thinking a lot lately about perspectives and changing as I’m doing massive amounts of editing and rewriting. I am being extremely productive but also extremely thoughtful and reflective about everything as I go over it.

It’s really all about perspective: each character sees the same things colored by experience and role and knowledge. And I get to choose which perspectives are shown when, and in which combinations and how to have them all unfold to tell the story.

It’s rather daunting, really. But I’m finding in editing I can turn things every which way to approach it from any angle. I already have the bulk of the work there, now it’s about filling holes and expanding sections and making it into a cohesive whole. I can work from one character’s angle and then another’s, and I find unexpected things along the way. And when I get stuck I can turn it another way, work on it from another viewpoint.

Maybe that’s the benefit of working non-linearly. Though I suppose it might work with anything.

I sound particularly optimistic today. I blame the adorable batty, though I hope it continues.

(And I’m going to buy the nice deck, of course. As soon as I have enough spare cash.)

That deck is *so* cute. Big round eyes and sweetness! And the lamb on the Strength card made me think of the lamb from the Pixar short Boundin’, which always makes me smile.

I see what you mean, about the scope and flexibility that your non-linear approach gives you. It must be wonderful to have that scope – though it must make it quite a task for you (even with Scrivener!) to maintain a complete overview. I’m really impressed that you can do that. Do you think that you would use this same, vignette-based form again, say for this year’s NaNoWriMo?

Hee! It does look like the Boundin’ lamb, that makes it even more fun. (The lamb is in the Star card, too.)

It is a lot of scope, and it lets me include a lot of things that wouldn’t fit into a linear narrative, which is good. I think it makes finishing more difficult, though, since beginning, middle & end aren’t as clear-cut.

I’d definitely do this vignette-based format again, I have something in outlining stages that would be very similar that I’m looking forward to working on. But for this year’s NaNo I think I’m going to do something a bit more straightforward. I could use the change of pace.

Keep your eyes on the stars, and your feet on the ground. Theodore Roosevelt