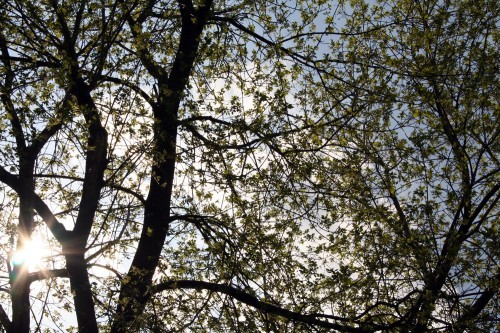 For spring, which has sprung, a random list of artsy things I would like to do/try/attempt someday, when time and space and money and such fickle things align properly:

And I have a long-harbored desire to make an installation sculpture consisting of a skull stuffed with teabags and a top hat, entitled Requiem for the Mad Hatter.

The weather gods decided to drop a weekend of summer into the middle of spring. It is warm to the point of floptastically floppy kittens and desperate desire for sangria. (I have the floppy kittens, but sadly lack sangria.)

I am reading and writing and contemplating a series of monochromatic rainbow paintings.

The other day Stephen Fry tweeted about Bat for Lashes and of course I had to investigate Stephen Fry-approved music. I haven’t fallen this hard in music love since I first heard the Dresden Dolls.

I listened to everything I could find online and then promptly bought both albums on iTunes. LOVE. It’s like someone put all my favorite music in a blender with a volume of fairy tales and a bottle of red wine. There was supposed to be a show in Boston tomorrow but that’s now postponed until August, which makes me extremely happy since I wouldn’t have been able to go tomorrow but might be able to depending on when exactly in August said show is postponed until.

So, anyway. Basking in unseasonable summer and in music love. Will likely spend the afternoon sketching knights and keeping an eye on the Kitten Flop Barometer.

I finished draft 4 of the novel on Monday. I think it’s draft 4, it might be draft 3.5. I immediately found about 8 things that need changing but since that draft is now safely in the hands of three trustworthy beta readers (if they’ve already beta’d it are they gamma readers now?) so I am trying to let it go. I made notes, but I put them aside to work on and I am trying to distract myself with other things.

It is not going so well. But it’s only been a couple days so I should probably chill out about it.

I’m working on the tarot court cards. I have rough sketches for the pages and yesterday I worked on the knights a bit. Here is a sneak preview of the Knight of Wands for those of you who did not already see it via Twitter: The large stack of paper the sketchbook is sitting on is the aforementioned draft 4-or-possibly-3.5. Happily the boy has taken it away today so it’s no longer taunting me from the coffee table. Am pleased with the knight sketch, need to do at least another one today and hopefully will have sketches for all of them by the weekend. Still not sure what to do with the queens or kings, but will worry about that later.

Other things I am doing to keep myself from over-thinking the novel include reading other novels. I finally finished Palimpsest yesterday and sadly didn’t like it as much as I’d wanted to. It’s gorgeously written, of course, but I didn’t connect with it at all. It hit wrong notes for me, or wasn’t my cup of tea or some other musical or beverage-based metaphor. Everyone else I know seems to love it, so it may just be me and my peculiar tastes.

I’ve pulled out a lot of my creativity books again, to continue ongoing self-analysis of my often tumultuous creative process. And I have more novels in the to-read pile for when I get sick of my own brain.

There is tea and sunshine, and I should probably paint something but not while I’m wearing this shirt.

Also, I have vague aspirations of updating this blog every day in May. Suggestions for content or photos or questions to answer welcome. I am up absurdly early. Even more absurdly than the timestamp might suggest. The boy leaves for work at 6am and I was vaguely awake then and somewhere in the vague awakeness I figured out the entire plot of my 2008 NaNoWriMo novel.

Seriously, the entire thing. Making just one change tied everything together in a perfect bow and made my recurring themes make so much more sense. I had to get up to write it all down, and even looking at it from the other side of a cup of tea it all makes sense.

I love moments like these, when everything falls into place. There is a shaft of early morning sunshine falling across my computer monitor. I decided to see what Pandora would come up with in a Tori Amos station and it is brilliant.

Of course, I have another novel to finish before I can really go and play in the recently untangled one too much. But it is almost there, with only la few outlined edits and additions to go, and it’s nice to know that I have someplace waiting for me that makes more sense today than it did yesterday.

Photograph taken late yesterday afternoon of the window of an antiques store. A couple more from a chilly but springy afternoon on my Flickr photostream.

Yesterday I wasn’t sure what I wanted to work on and couldn’t quite focus enough to write. So I pulled out my big box of random supplies and found a bunch of polymer clay I’d pretty much forgotten about.

And I made a sheep. 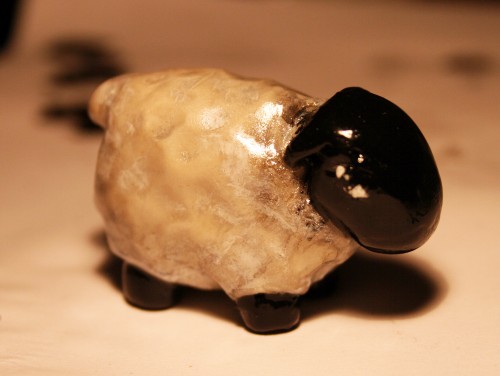 He’s a bit over an inch tall and about 2 inches from head to fluffy tail. He is more or less the same somewhat shifty-eyed sheep from Secret Agent Sheep, except with stubbier legs so he would stand up better. He’s made of polymer clay that was detailed in acrylic and glazed. I haven’t made anything with polymer clay in years so I’m pretty impressed with myself.

I kind of love him. But I might put him up for sale on Etsy. I need to see how durable he is when he’s completely dry.

Also yesterday I read Laurie Halse Anderson‘s new book, Wintergirls, in its entirety. Because I picked it up to read the first page and could not put it down. It’s heavy and somewhat draining but absolutely beautifully written. I really kind of wish I’d been able to read her books as a teenager.

Today I am chipping away at my list of book edits and compiling files of literary agent information. It is probably more fun than it sounds, because I have tea and a small clay sheep looking at me sideways.