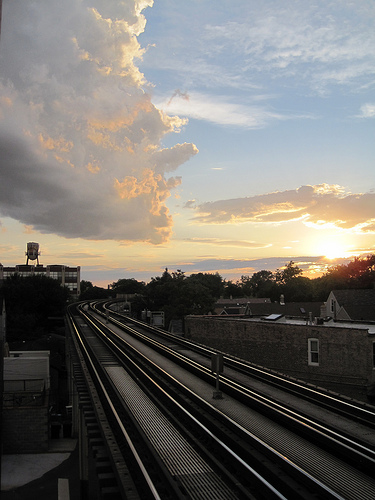 She asked me if you could take the train to heaven, because that’s where it looked like the tracks were going. Disappearing into the horizon below a Maxfield Parrish sky.

When I was her age, I thought you could reach the sky if you walked far enough.

That somewhere there was an edge to step off, into the clouds.

I think I tried, once or twice, walking until I was too tired or bored to continue.

Those Maxfield Parrish skies were always the most tempting, the ones that caught the light just right so they looked like so much more than clouds and sky and sun.

No, I told her. The train stays on the tracks.

How do you get to heaven, then? she asked, staring at the clouds.

I didn’t know what to say.