I received a rather rained-on cardboard box this morning.

This is what was inside: 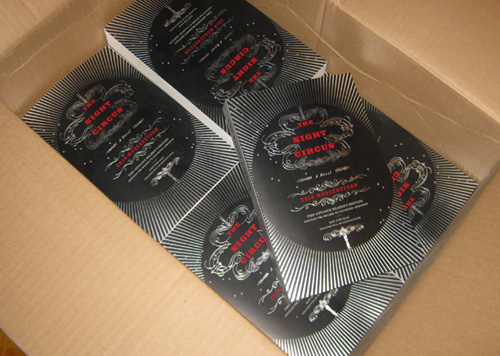 These are Advance Reader Copies of THE NIGHT CIRCUS. Commonly referred to as ARCs, which I’m still not entirely sure stands for Advanced Reading or Advance Reader or some combination thereof. I’m pretty certain that the C is for Copy, though. Even though these say “Edition” on the front. 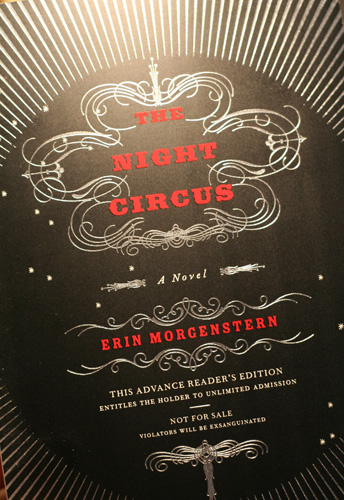 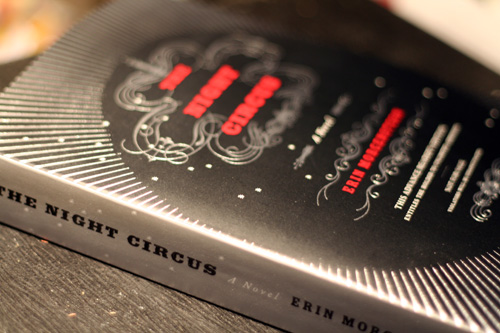 They’re hard to photograph because all of the silver is metallic and shiny. They’re really gorgeous, and this isn’t even the final cover.

I have been dying to share a look at the interior design ever since saw a preview of it ages ago, because I absolutely adore it, and now I have permission to share. 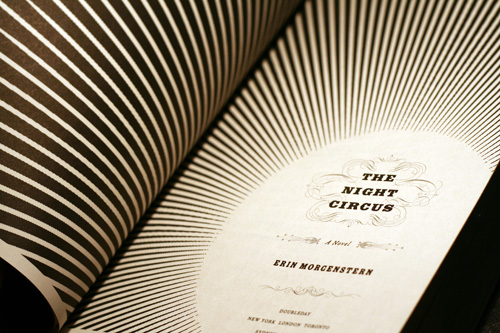 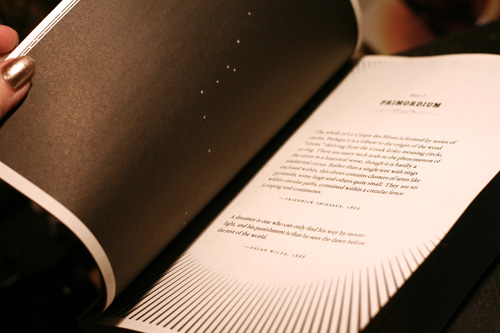 I’d tell you I love it so much because I think it’s evocative of both the Stargazer and the bonfire, but that wouldn’t make sense to that many of you yet. Ah well.

I only have ten copies so I am thinking very carefully about what to do with each one. There will likely be some sort of contest/giveaway at some point.

And I kind of want to leave one in some mysterious location somewhere and give clues to find it. Maybe after the snow melts.

Beautiful! I love the idea of leaving one for someone to find.

Big SQUEEEE! over here! It’s so pretty and fits the story beautifully.

It really looks amazing. How exciting this must be for you. 🙂

And I like the idea of someone finding it via serendipity. That sounds fun.

I just had to suck the drool back a little.

Those are so beautiful, they deserve many moments of awe. I love the interior design!

squeeeeeeee! god, how beautiful are they?

“Violators will be exsanguinated.” I love it. 😀

Eeeee! I was away over the weekend, and didn’t see this, I’m sorry. But they’re fabulous!

Is the final cover going to be very different? This one’s brilliant, as it is!

The final cover is different & absolutely gorgeous, there’s a peek of it in the trailer I just posted!

They look gorgeous Erin!! So exciting! Can’t wait for the world to start reading them!