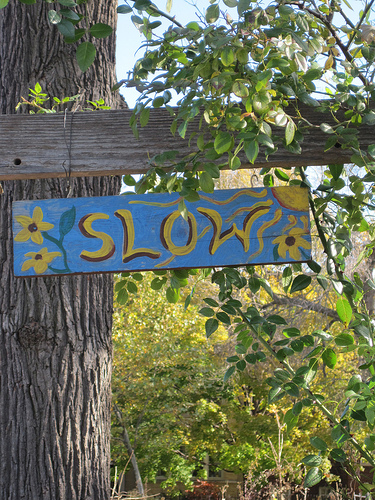 My therapist recommended the whole nature retreat thing. She pointed out how much vacation time I’d accumulated and pontificated about stress and also she threatened to call my boss if I didn’t go, which didn’t seem particularly ethical but I didn’t want to argue with her.

I had to lock my cell phone and my laptop in a box when I got here. The bearded guy in the office said he was going to bury them in the garden for the week but I think he was joking. He gave me a notebook and a fountain pen which is actually really nice to write with. I like the way the ink soaks into the paper.

Mostly the staff leaves the residents alone and everyone is friendly in a quiet sort of way, but if you need anything you can ask and they’ll help.

On my second day I asked for a new notebook since I’d filled the first one already, with thoughts and poems and little ink stars. The bearded guy gave me three more and suggested a good writing spot, showed me the right path and told me to keep an eye out for the sign, which was easy to spot because it’s painted in bright blue and happy yellow flowers.

He didn’t explain why the sign says “slow” but once I’d filled an entire notebook only to look up and see that the sun had only just barely moved from the same spot in the sky where it had been when I started writing, I figured it out.