Considering the fact that a comment I received on the blog yesterday reduced me to a sobbing mess for a good hour (it was not just the comment, the comment was the back-breaking straw on a terribly stressed camel of a day) I feel it would be wise to disable comments on the blog for a while. I have been historically lousy about replying to them anyway.

I am terribly fond of the internet but I am also a sensitive person which is not always the best combination for being a fairly public figure on said internet. And the most hurtful things seem to reach me via blog comments.

(I also tend to think of my website as my personal corner of the internet, like my own little virtual living room where I serve several varieties of tea in non-matching cups and tell small stories and try to keep the artwork dusted. I think I take things said here more personally than I might on Twitter, which always seems like Someone Else’s living room.)

This particular comment (which I did not approve for posting) derided me for sounding like an over-excited schoolgirl on NPR, going on at length about my repeated use of the word “like” and other such evidence and mainly, I think, implying that I should be able to speak as well as I write.

In thinking about it now that I am slightly more clear-headed, I am (and have always been) wary of expecting someone who can express themselves properly while typing to be able to accomplish the same feat with their tongue with similar ease, especially on the spot.

I am more skilled with my fingers, at least in that capacity. I wrote a flax-golden tale about it. I have social anxiety that ties my tongue more than might be considered normal.

Sometimes I am reduced to making wordless noises and I end up sounding something like a baby bird in order to express myself properly vocally though I try not to do that in interviews.

And the commenter did not mention this, but I giggle. Shamelessly. Whenever I can. Sorry.

Working with words in writing is a different animal than working with them in conversation. I also have a lot more practice with one rather than the other.

Yes, this is one comment in a sea of lovely comments (though there have been other upsetting ones in the past) but I think my initial stressed-out reaction is a good enough reason to suspend blog comments for a bit.

I am almost always reachable on Twitter for any blog comment-esque thoughts you might want to express and I might re-enable comments at some point in the future.

For the moment I’m going to stick to comments I find unexpectedly in my wallet. 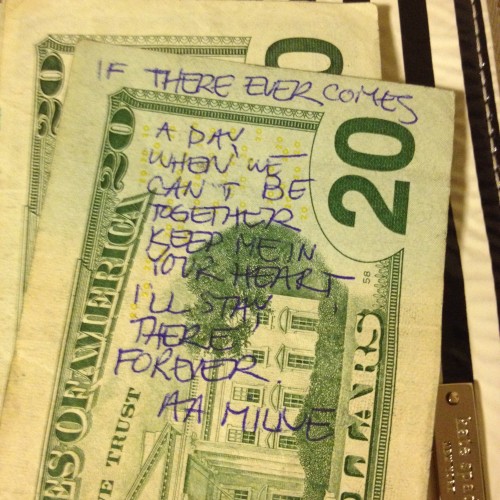