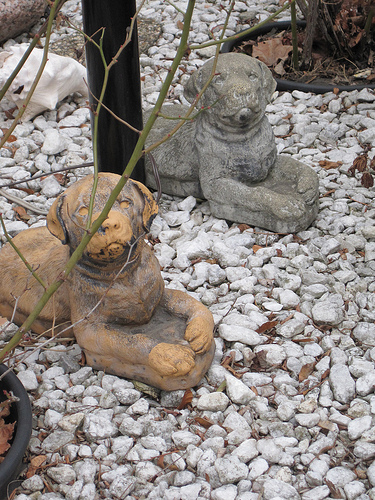 I only wanted one but when I got to the address on the piece of paper (after getting lost twice because the handwritten 8s looked like 3s) I was informed, quite politely, that they only were only available in pairs.

The woman at the 8s-not-3s house (who gave me tea in a flowered china cup without asking if I wanted tea) said that it was customary to inform the potential owner about this important detail up front but apparently the guy who writes his 8s so they look like 3s is new and still being trained and it was fine and completely understandable if I would prefer not to continue with the transaction under the circumstances but I should feel free to stay a while regardless and enjoy my tea and I can have the tour and who knows, I might change my mind.

None of them were in cages like I half-expected (she didn’t believe in cages) but all of them, on ottomans and settees and out in the garden, were in pairs. And each pair (of the ones I saw) was almost identical except one was light and the other dark, or warm-toned and its partner cool.

I had told myself I couldn’t manage two but of course when I met a pair I liked I knew I had to take them both, they’re too perfectly matched to separate. They even tilt their heads in unison when I talk to them.

The woman declared them a perfect fit which was strange because she didn’t ask me anything about myself, not even how I took my tea, and she tied red ribbons around their necks while I signed the paperwork but they pulled them off in the car on the way home, each helping the other wriggle free.

I haven’t given them names yet. They have similar personalities, they’re both quite attentive and affectionate and helpful, though one of them particularly likes to fetch things like sticks and seashells and small lizards and things I’d thought I’d lost, while the other prefers reading biographies and watching detective shows and balancing my checkbook.

The woman from the 8s-not-3s house called me after a week to see how we were getting on and asked me a lot of questions about their behavior and sleeping patterns, and then told me I’ll know they’ve really settled in once they’ve mastered mixing a proper martini.