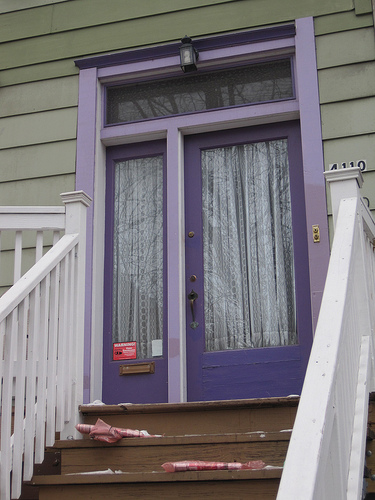 the recondite times, a non-periodical

I painted my front door purple mostly on a whim. I had purple paint (in two different shades) and I figured it was a cheerful sort of color that might help brighten up the winter grey. Not that I spend much time looking at my own front door, but it made sense at the time.

I thought it looked rather nice when I finished and didn’t think much of it until the newspapers started arriving.

They appear on the front steps wrapped in translucent pink plastic, but I never see who delivers them. At least one turns up each day and sometimes I get three or four at a time.

At first I thought it was just a mistake and I dropped them in the recycling without reading them, but then I noticed that they have my name on them so I started reading.

They look more or less like regular newspapers, but the contents are a lot more interesting, and after I read through an entire issue I found the door information, color-coded by subscription.

Apparently my lilac trim accidentally put me on their favored subscriber list.

I know it would be safer to just repaint the door, but I can’t bring myself to do it.