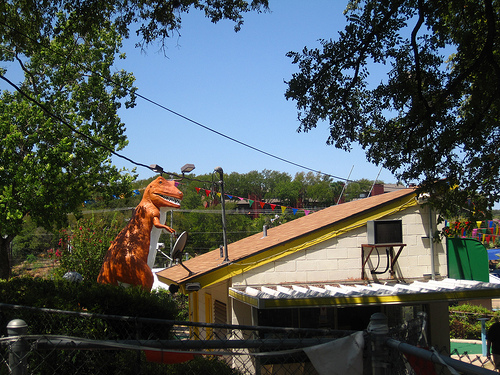 The dinosaurs showed up near the end of tourist season when we were all starting to get bored but before our welcome smiles had completely worn out, which was good timing. It was something unexpected to break up the routine and the dinosaurs were much nicer than the typical tourists.

They were never really extinct, one of them explained. They went to live on an island and they said it wasn’t anything like that movie island with the dinosaur park, though they all liked that movie anyway (but only the first one).

They were here for a quiet vacation so after the initial surprise everyone in town left them alone unless they needed directions or someone to take Instagram photos for them. They ate at all our best barbecue joints and clam shacks and wandered around sightseeing. It was hot that week, so we mixed them big tubs full of complimentary strawberry limeade.

They all bought souvenir t-shirts that were much too small for them and they claimed were for friends but we think they were just being polite.

Before they left they wrote a thank you note on the one of the blank billboards by the beach and we kept it up all through the off season.

No one wants to say it out loud and jinx it, but we’re all hoping they’ll come back again this year.