flax-golden tales: three small deaths on the back gate 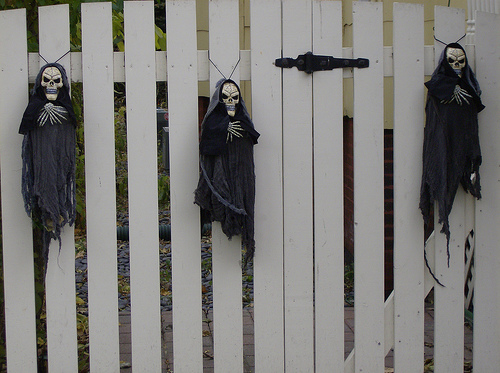 three small deaths on the back gate

When I found the deaths hanging on the back gate I went back in the house to tell my mother, but once she came outside to see them for herself she didn’t seem very concerned.

Oh, they’re just small deaths, she said, picking up the whispy corner of a tattered robe. It slipped through her fingers like water and returned to its ominous hovering. I think the skeleton-face wearing it frowned, but it was difficult to tell.

What’s a small death? I asked.

Death of a hope or a dream, maybe an opportunity, and that slightly bigger guy on the end could be the death of a relationship, but if he is I doubt it was a particularly long one.

Three seems a lot of deaths all at once, I said. She nodded.

Life insists on happening all at once, she said. So does death.