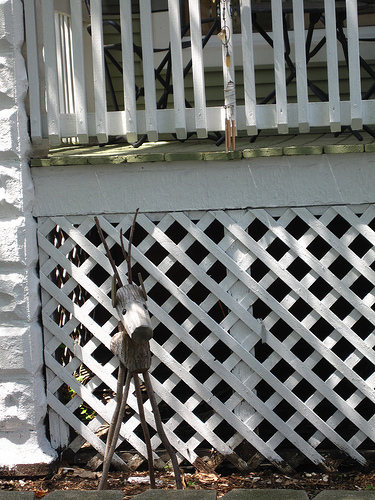 I should have made his legs shorter, but other than that I think I did a pretty good job considering he’s my first deer.

Well, he has antlers so maybe he’s a stag but he’s small, so deer seems more appropriate. Also he’s made of logs and sticks so it probably doesn’t matter.

I also forgot to give him a proper name but he responds to “Deer” and seems to like it.

I could have added hinges to his legs, maybe, that might have helped. He walks with a wobbly, uneven gait on his too-long legs. I worry he’s going to fall down but he always manages to right himself.

We’ve been practicing in the yard and I think he’s getting the hang of it, though sometimes he just jumps in little circles.

I asked him if he would have preferred shorter legs but he said no.

When I asked him why he said he likes his long legs because they let him jump higher so he can see more of the world.