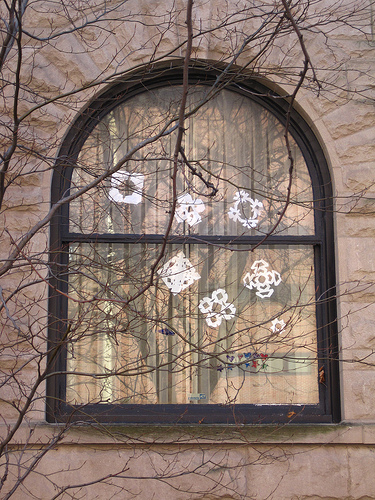 We tried to get the snow to come inside so we could keep it.

So we would have it to play with on too-hot summer days.

We left the door open but other people kept shutting it.

The windows wouldn’t open so we made paper snowflakes and taped them to the glass.

We figured that the outside snow would see the paper snow and be intrigued and also know that snow was allowed to come in the house.

(We tried to arrange the paper snowflakes so they’d look like they were having a really good time indoors, like a snowflake party.)

When that didn’t work we went outside and talked really loudly about how great the inside of the house was compared to the yard and how snow would just adore the wallpaper in the downstairs parlor and oh, aren’t the chairs in the dining room so comfortable that they simply must be sat on?

(The dining room chairs are not really that comfortable but we did not feel too bad about lying because snow probably does not sit on many chairs and would likely not be able to tell the difference.)

But that didn’t work either and then the snow stopped so we went inside for tea.

We left the paper snowflakes on the windows, so the snow will remember us when it comes back.