flax-golden tales: not a real dog 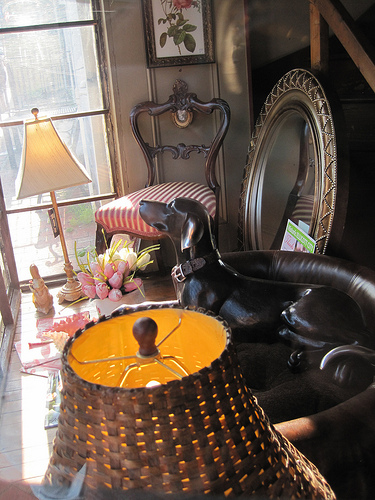 not a real dog

Momma says he’s not a real dog. She says he’s “just a statue” and “not a particularly impressive one at that.”

She says I shouldn’t pretend he’s a real dog because he’s not and I am “too old” for pretending.

But the dog tells me that Momma is “speaking nonsense” and I should “pay her no heed” and he talks with an English accent which makes him sound very serious so I keep listening to him, which is not pretending but Momma doesn’t seem to know the difference.

(Momma says he can’t talk but he says she doesn’t listen properly. Then he complains that this “arrangement” is “beneath” him and sometimes he calls us all “peasants.”)

He likes to be placed on chairs near lamps because he says it makes him look more dignified, but Momma always moves him and then I have to move him back and re-arrange the lamps.

He demands (“requests”) fresh flowers from the garden every day and I get them for him even though it makes Momma mad.

I’d rather Momma be mad than the dog.

He bites when he’s angry.