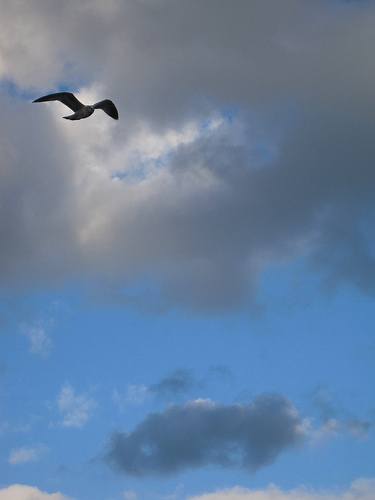 I hadn’t seen any birds at all for so long that at first the dark spot on the blue sky was a puzzlement. My eyes couldn’t sort out what it was until it came close enough that the birdness was undeniable.

I think he’s a seagull. That would make sense.

I expected him to fly away, but he’s stayed with me. I worry that he might be better off if he kept going, though I am glad for the company.

He cries, but most of the time the wind carries the sound away. Not that I would understand what he’s trying to tell me even if I could hear him properly.

He circles my boat, but he never tries to land on it. He looks at me forlornly, as though he suspects, like I do, that there is no more land to be found.