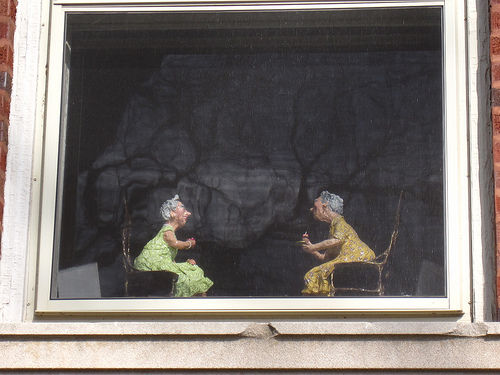 the tiny maybe-witches down the street

My mother says they’re the biggest gossips in the neighborhood but I don’t think that makes much sense. They’re both too small to be the biggest anything.

They sit in the window together on tiny chairs and drink their tea and talk a lot.

They’re like miniature versions of the kind of ladies my father sometimes calls cat ladies but they don’t have a cat. (I think that’s because a cat would probably eat them.)

My sister says they’re witches. I’m not sure, because they wear flowered dresses and they don’t have pointy hats, but they might be in disguise.

I’ve been told to stay away from them but if I walk by their window I say hello. They call me “dearie” and ask me about things that I don’t understand how they know about because I haven’t told anyone, so I don’t always admit everything but I try to be polite.

They give me lemon cakes smaller than my fingernail that taste like icing-covered sunshine and always make me feel better than I did before.