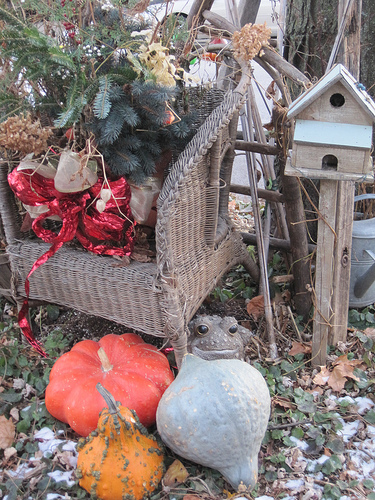 seasons greetings from george the toad

He greets everyone warmly, old friends always even if you’ve only just met. If someone refers to him politely as Mister Toad he will chuckle and say that Mister Toad is his father and do please call him George.

George offers cocoa and tea and mugs of warm soup made with winter squash and cinnamon and sage. To take the chill off, he says, even as the snowflakes continue to fall on your hat and in your soup.

(But he is correct, it does remove the chill as gently as unravelling the scarf around your neck, though your scarf stays cozily in place.)

George tells stories and shares recipes and rhapsodizes about this magical time of the year, going on at length about how delighted he is to have such lovely company.

“He used to be a prince,” someone whispers quietly to their neighbor.

“He still is,” comes the deft reply.

George himself says nothing about the matter, but he winks at you as he refills your tea.