This is my Rob Brezsny horoscope for this end of December, beginning of January:

CANCER (June 21-July 22): Big rivers don’t travel in straight lines. Their
paths are curvy and complicated, with periodic turns and bends. In some
places they flow faster and in others they’re slower. Their depth and
width may vary along the way, too. Your own destiny is like one of those
big rivers, Cancerian. In some years, it meanders for long stretches,
slowing down as it wanders along a crooked course. It may even get
shallower and narrower for a while. But I expect that in 2014, you will be
moving more rapidly than usual. You will be traveling a more direct route,
and you will be both wide and deep.

2013 was a meandering, crooked year. It was shallower than I had expected in some ways and rockier than I would have preferred but here we come to the end of it, stronger and wiser.

We spent last New Year’s Eve in this then brand-new apartment, surrounded by cardboard boxes. Now instead of boxes there are books and teal chairs and two very well-stocked bars. We are doing fancy long rambling dinner, there has already been cheese baked with brandy and honey, grilled hearts of romaine and king crab legs. There are short ribs in the oven braising in red wine, prosecco gelee with raspberries chilling in refrigerator and non-gelee prosecco with St. Germain being sipped from coupes.

(We decided if we weren’t going to go out, we might as well have as delicious a night in as possible.)

Looking at last year’s post about wanting time to rest and read and write and I did quite well on two out of three and not too terribly on the third all told. I needed the rest, I think. I know.

I’d like to have something book-shaped by the end of 2014. That’s not a resolution, because I’d have liked the same thing for this year and last year for that matter, but things don’t always go the way we’d like.

Stars in my hair again. My stars are getting older and wiser, too. And they’re showing it, glass glitter oxidation. Dark around the edges. 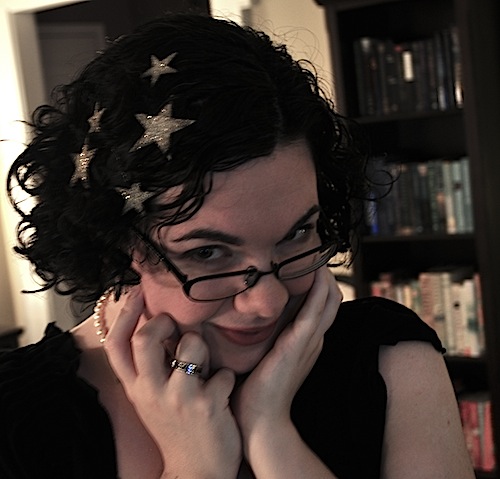 I have other stars that are brighter, having been kept safely sealed in a bag but I like these ones. They’re well-travelled and well-worn and I have the whole bunch of them in my hair this year. (There are seven, total, the others are hidden on the other side.)

Later tonight there will be tarot readings and midnight kisses.

I am looking forward to 2014, especially if it is indeed more direct than meandering. I think I’m ready for it. I wasn’t before, even when I thought I was. Hindsight.

Didn’t have an obvious song of the year for 2013. Had to sit and think about it and as I pondered I realized I habitually put the same album on whenever I felt lost for what to listen to, and it was always just right.