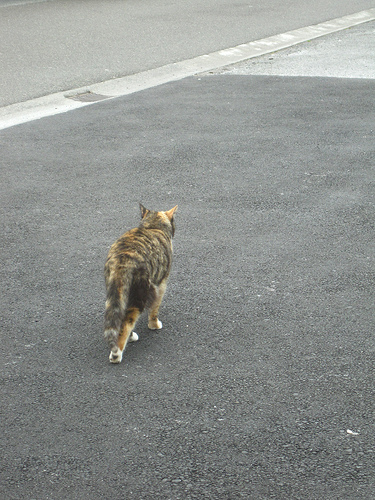 brief conversation with a traveling cat

There’s a cat walking in the road alongside me and after it keeps pace with me for a bit I ask if it can talk, a habit I developed with all cats from a young age (though none of them ever could).

“Oh,” I say, and he doesn’t say anything else and I wonder if I’ve only ever asked Canadian cats if they can talk before and had thought the muteness a quality of cats in general and not Canadian ones in particular.

The cat and I walk together in silence down the street until we reach an intersection and when I stop to wait for the walk signal he stops as well, sitting by my feet.

“This is where I leave you,” he informs me, warmly, as though we had been chatting companionably and not walking quietly and then he adds: “You may pet me on the head if you would like.”

I pet him on the head and he purrs, a short but approving sort of purr.

“Later you will wonder if you actually talked to a cat or not,” the cat says, “because that is how your mind works, so do please remember that we had this conversation.”

“I will,” I tell the cat, hoping that it’s true, and he tells me that not all cats can talk and not all the ones that do have anything to say that’s worth listening to, and that he likes my scarf, and before I can say thank you he turns and walks away.