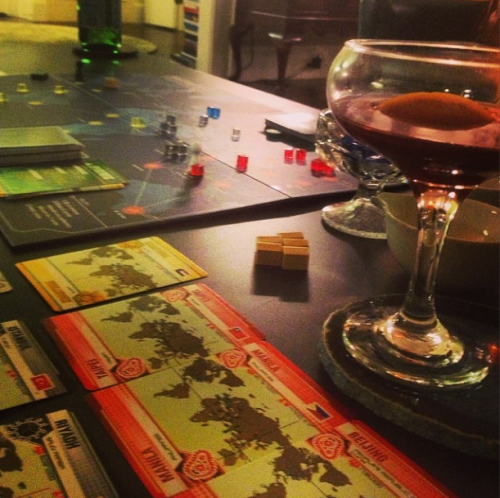 When I had bronchitis and I was basically useless and after I’d watched Wreck-It Ralph four times I started watching episodes of TableTop on YouTube. I have not been much of a board game person beyond never finishing a single game of Monopoly as a child and an enduring fondness for Clue! but watching other people play newer games was oddly fascinating and entertaining (I think it would be even if you weren’t nursing a fever) and beyond that was a fantastic way to get a sense of the games themselves.

So when I could breathe again I went out and picked up a couple of games that I’d been intrigued by and now I am a little bit obsessed with Pandemic. I’ve never really played a cooperative board game before and really like it and it’s reminded me how much I like strategizing. And swearing at inanimate objects. Also I feel like it’s teaching me better geography.

This is pretty much Wil Wheaton‘s fault, but I have been fond of Wil ever since I watched Star Trek: TNG on a tiny black & white tv and had no idea how ugly Wesley’s sweaters were. True story.

In keeping with the “things I couldn’t do when I was sick” theme, I am back to creative cocktailing and I’m playing with something I was introduced to via Julibox a few months ago: the wine-based cocktail.

Tonight’s experiment was a variation on a recipe they’d sent that I made a few creative substitutions for and ended up with a pinot noir/apple brandy/Licor 43 (which is, by the way, one of my new favorite things)/pomegranate juice/lemon concoction that was really quite lovely.

I’m getting better at creative substitutions. And fixing cocktails if they don’t quite come together on the first try. Also, it’s nice to have options for wine that are sangria-esque without being proper sangria.

Both of these things combined are doing wonders for keeping my brain awake and my inner editor distracted, which is precisely what I need right now.