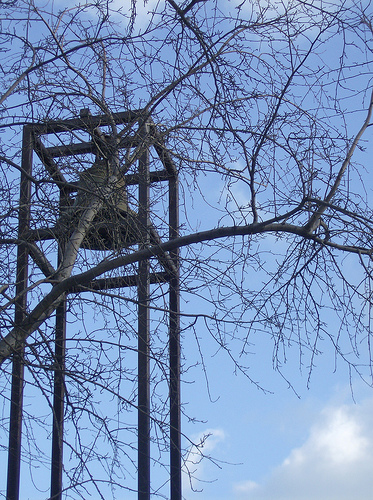 They used to say “Mind the Bell” mostly as a… what’s the opposite of a greeting? They’d say it when bidding farewell to someone, sometimes turning it into a single word: mindthebell, or minddebel. Nobody does it as much anymore, but teachers still say it at the end of class, because their teachers said it and their teachers before them.

I asked once what it meant and was told it was a shortened version of “Be Mindful of the Bell” but when I asked why we needed to be mindful of the bell no one could give me an answer.

They’d point at the old bell tower with its perpetually silent bell and shrug.

My grandmother told me once that if it rings I should run as fast as I can, but my father says grandma doesn’t always make the most sense.

I know someone who tried to climb the bell tower once on a dare, but he only got about halfway up the beams before he couldn’t find anymore footholds and had to go back down.

He told me he got high enough to see the bell properly, but as far as he could tell it didn’t have a rope or anything to ring it so the whole minding thing was probably just an expression.

But this morning it started ringing and I was the only one who ran.

So I was the only one who got away.