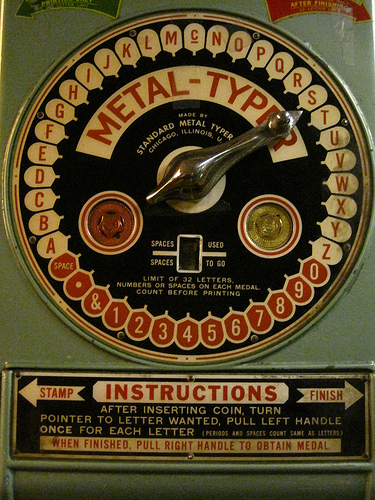 My dad collects and restores these vintage machines, like a hobby. Maybe machine is the wrong word, they’re like, weird geeky contraptions you find outside supermarkets and at tourist attractions, gumball machines and those ones that squash pennies into miniature pictures of historical landmarks or whatever.

I can never tell what he does to change them, even though I’ve sat and watched him dismantle dozens of the things and then, um, remantle them again. He doesn’t add anything, not that I’ve seen.

But they’re all different once they’re working again. One of the gumball machines gives solid gold gumballs now. They’re rainbow at the top in the fishbowl-looking part, but the one that drops down after you put in your quarter is always solid, unchewable gold.

Gold gumballs I can deal with, but the latest penny-squashing thing takes your nice, normal penny and squashes it down into a printed copper oval that describes how you’re going to die.

I thought it was a joke until last week. Now I’m worried.

I love how the alchemical transformation of gumballs is not worrisome, but a penny innocently tells you your fate, and *now* it’s worth a brow furrow.

I love those old machines.

But yeah, kind of disconcerting, if you once let them past your real-world oh-so-modern knowledge – some of them claim such powers…what if they actually *could*?