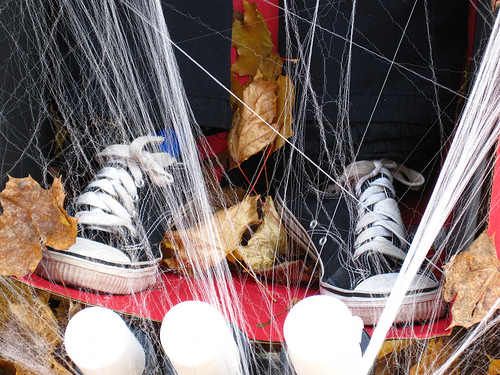 “Are you really wearing those shoes?” the girl next to me asks in the pre-midnight lull before everything starts, looking down at my feet. From her tone I’m guessing her expression is some combination of incredulous and disgusted, but it’s too dark to see much of her face.

“Well, yeah,” I say, because they’re the only pair I have. They have decent traction, and I can run pretty fast in them.

“It’s your funeral,” she says, and I can see the dismissive shrug clearly in the moonlight as she turns away.

She’s wearing tall boots with zippers up the sides. They look heavy and they crunch the leaves a lot more than my sneakers do, so I don’t get why she’s playing the superior footwear card.

After midnight, I get about ten paces before I figure it out, tangled in cobwebs over a freshly turned grave.

I should have guessed that shoes with laces give them something else to grab on to.

Making it that much harder to get away.