in which there is sadness & laughter, cake & champagne

The universe seems to have this odd fondness for everything happening at once, I’ve noticed.

Last Tuesday, I handed in what I’d thought might be my final edits.

On Wednesday morning, I got another round of notes, the changes due on Monday.

On Wednesday afternoon, my grandmother passed away.

I don’t know what to say about Grammy, really. I will never be able to say anything as poignant and perfect and aptly funny as the eulogy my uncle delivered on Monday.

I could mention some of the same things, like the absurdly buttery cakes that seemed to self-generate on her kitchen table (she baked one every three days), or how she wrapped brownies individually in wax paper.

How she adored all things Peanuts and I’m pretty sure every card I ever received over 30 years had Snoopy on it, and I doubt there were any repeats.

She showed up unannounced at the door on Hallowe’en when we were little, traumatizing my little sister. One year she was Snoopy, of course. Another she was Peter Pan.

She claimed she was 39 her entire life. When I was 9, my dad turned 40 and I was very confused as to how he could be older than his own mother.

My grandparents’ 60th anniversary was the same weekend as my wedding. I gave Grammy my bouquet. I didn’t want to throw the thing, anyway. 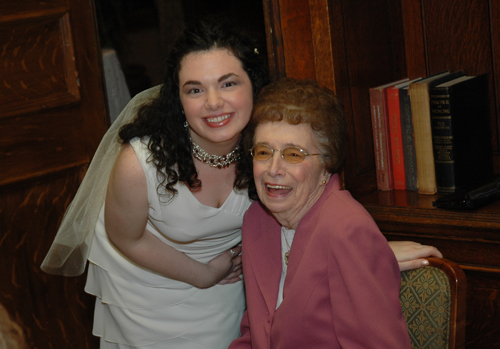 And as fabulous as she looks here, she wore an even more fabulous metallic blue suit to other weddings.

In the aforementioned eulogy, my uncle said she was remarkable. He was right.

There’s not a better word.

I spent the two days in between Thanksgiving and the wake writing as much as I could. I handed in the draft just before I left.

For one of the points I was unsure of how to address, I added a conversation between a character and his grandmother. It was something I’d actually considered before, but hadn’t written down.

I think it must have worked, because Monday afternoon, after the remnants of the post-funeral brunch crowd had migrated into the bar, when I e-mailed my editor to tell her I wouldn’t be home as early as I’d thought, she wrote back to tell me not to worry about it. My edits had been accepted and the book had gone into production.

So, in an unusual but oddly appropriate way, I officially ended a very long stay in Revisionland sitting by a fireplace in a bar, listening to my dad and his siblings tell hysterical stories about my grandmother.

I think storytelling runs in the family.

Someone bought a round of champagne for about twenty people when I told everyone. There were toasts.

I’m sure Grammy would have loved it.

::hugs:: what a wonderful woman she sounds like. That also runs in the family, it’s obvious.

These are lovely stories of your grandmother. Thank you for sharing.

I am sorry for your loss.

I’m so sorry to hear about your Grammy, Erin. She sounds like a wonderful grandmother, and I’m glad that she was a part of your world – as I’m sure she must have been glad that you were part of hers.

That’s wonderful news from your editor! Congratulations, and welcome home from Revisionland!