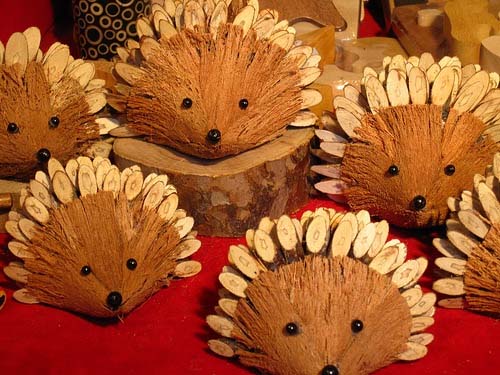 I made you a hedgie friend! she says, handing me a spiky, beady-eyed ball of some sort of bark and artfully composed twig slices.

Thanks, I say, putting him down on my desk. I turn him so he faces the printer, but he still looks like he’s staring at me with those glossy little eyes.

I already have a hedgehog, I tell her when she brings me another the next day, attempting to give back the almost identical… thing.

That one needs a friend for when you’re not around, she says. They get lonely.

The day after that, there’s a third one on my desk, sitting alongside the other two.

The next day there are six.

No matter how I arrange them, they’re always staring at me with those unblinking eyes.

There was an older lady at work who was delighted we shared a birthdate, and she used to give me hedgehogs for good luck. I worked there nine years.

Hee! A single hedgie is cute. En masse they are kind of disturbing.

They’re cute! But yes, you wouldn’t really need that many!