flax-golden tales: the memory of birds 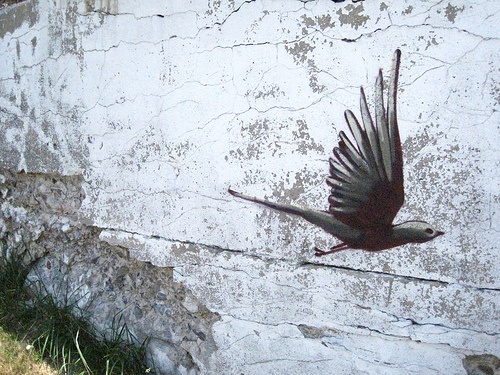 the memory of birds

What is it? she asks, pressing her hand against the picture on the wall. I wonder how many other children have repeated the gesture before her, impressed that the paint has not yet worn away, though the wall is crumbling in other places.

What is it? she repeats, and in my distracted wonderings about the longevity of paint it takes me a moment to recall the name.

It’s a bird, I tell her, though the word sounds wrong as it escapes my lips—too harsh and short for the delicate lines of the painting—I am reasonably certain of it. I think there were different types of them but I decide the explanation is better left simplified.

Is it a real thing? she asks, her finger hovering over the black dot of an eye without touching.

It was, I say, still favoring simplicity.

So it was here Before and someone saw it and repeated it on the wall so other people would see it and remember when it was real? she asks.

Something like that, I say, but no one remembers the real ones anymore.

I’ll remember that it was real Before, she says, and she reaches up on tiptoe to trace the lines of its open wings before nodding to herself and taking my hand, leading me farther along the crumbling wall.

The very core of your writing while appearing agreeable at first, did not really settle properly with me after some time. Somewhere within the sentences you managed to make me a believer but only for a very short while. I however have got a problem with your jumps in assumptions and you might do well to fill in all those breaks. In the event that you actually can accomplish that, I would surely be fascinated.