flax-golden tales: borne back ceaselessly into the past 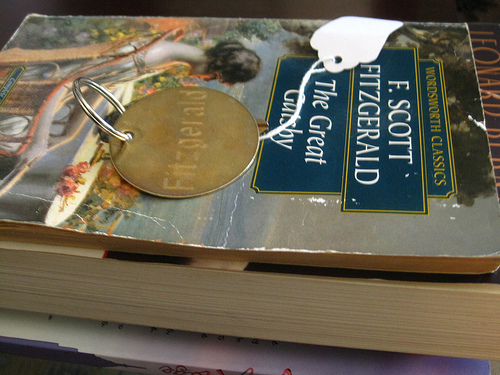 borne back ceaselessly into the past

I chose this hotel because it has author themed rooms, though which author you end up with is a matter of luck. To my delight we end up in the Fitzgerald room. There’s even a worn paperback of The Great Gatsby on the table by the bed, sitting next to a green-glass lamp.

I say something about the green light and he just stares at me.

“What are you talking about?” he asks after the pause has gone on too long.

“Gatsby,” I say, holding up the book.

“Isn’t that one of those boring books they try to force you to read in high school?” he asks. It’s more dismissal than question, he’s already turned his attention to the rest of the room.

“Boats against the current,” I murmur to myself as he tries to figure out the buttons on the television.

It is in this moment that I realize we’re not going to last.

Hey, Erin! What was the name of this hotel!? It sounds awesome.

BTW, I just started The Night Circus. I love it so far!

Heya this is kinda of off topic but I was wondering if blogs use WYSIWYG editors or if you have to manually code with HTML. I’m starting a blog soon but have no coding expertise so I wanted to get advice from someone with experience. Any help would be greatly appreciated!

*love* this one. Beautiful, simple, and resonnated a little too well.

In 1970, after working for ten years as an executive secretary – Katharine Gibbs trained, with lightening-speed typing skills and real shorthand – I went back to complete college.

My English Lit I term paper was on East of Eden; my friend’s was on The Great Gatsby. I typed his paper, error-free, on a IBM Selectric typewriter.

After he turned his paper in, he gave me a small box. The inscription on the card read, “In the beginning, there were two green lights on the dock. Thank you.”

Inside was the best present I ever got – two small emerald earrings.