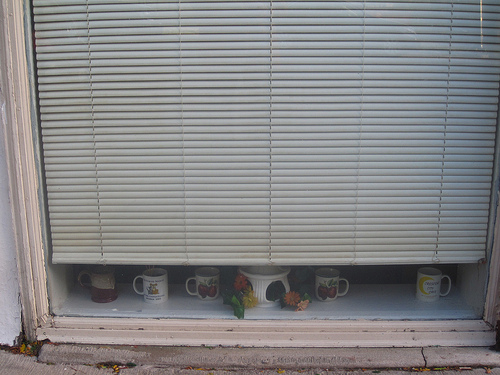 Suburban witches meet in secret. Or as secret as suburbia allows, with its nosy neighbors and their curious, narrow-eyed stares. Jokes are made about broom closets, but it is easier this way.

No Sabbat circles on soccer fields. They turn the wheel of the year in living rooms and basements, under the guise of book clubs or knitting groups. (Though they do have a proper book club that meets on alternate Tuesdays, and several of them knit.)

In October, post-trick-or-treating, when sugar-sated children are tucked in bed, they wander through the veil-thin night in ironically worn pointy hats. Using disguises to be themselves.

Though circles and spells are kept at home, concealed behind closed plastic window blinds.

Punctuated by spice cake and candy, gossip and mugs of coffee.

This was absolutley wonderful and weirdly creative. Erin, you are one of the best writers alive, just to let you know. Thanks for the signed copy I got at Odyssey!!:)

I loved your story and I have enjoyed all your stories and the pictures too. Lovely!

I know this if off topic but I’m looking into starting my own blog and was curious what all is needed to get set up? I’m assuming having a blog like yours would cost a pretty penny? I’m not very web savvy so I’m not 100% sure. Any tips or advice would be greatly appreciated. Kudos

Do you mind if I quote a few of your articles as long as I provide credit and sources back to your blog? My blog site is in the exact same niche as yours and my visitors would genuinely benefit from a lot of the information you provide here. Please let me know if this ok with you. Thanks!

Great story says a mom from suburbia getting ready to celebrate Halloween.