flax-golden tales: the sheep know all your secrets 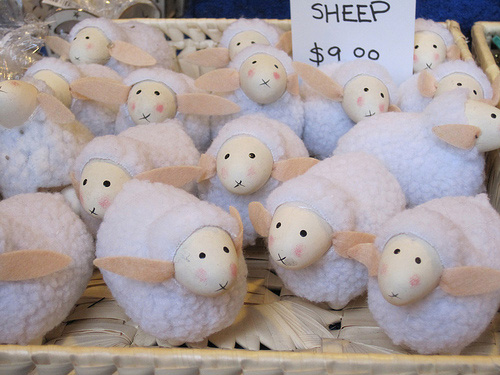 the sheep know all your secrets

“They seem expensive,” I said to the pink-haired girl running the booth who looked like she should be somewhere other than a craft show, or at least selling something more punk than small fuzzy sheep.

“They’re actually on sale today,” she told me. “Normally they’re thirteen but I knocked them down to nine since it’s the last day and there are so many left.”

“Still seems high for a sheep that doesn’t do anything.”

“Oh, they do something,” she said, half-giggling and tucking her hair behind her ear while she leaned closer to explain. “Each sheep knows a secret, that’s why I have to paint each mouth with a little x, so they won’t tell until after they’re paid for.”

“What kind of secrets?” I asked, even though I was pretty sure she was either joking or flirting with me or both.

“Some of them know those deep dark past secrets you think no one else knows and others know future stuff like the name of your one true love or the day of the month your life will change, things like that but each one is different.”

I bought six sheep including the one that was staring at me because I only had enough cash for six and I still thought she was just flirting with me since she tucked her pink hair behind her ear three different times while she was wrapping them, but she turned me down when I asked if she wanted to get a cup of coffee or something.

Once I got home and figured out how to get the sheep to tell me their secrets, I wished I’d bought more of them.

I adore this!!! It’s true. You have to be both very open hearted and very cautious about what you purchase at craft fairs and festivals and such.

This year at the German Christmas market in Chicago I found some tiny handmade wooden rocking horse ornaments, and there was just one among them who had lost his rocker. Fairy tales taught me that he was the one to take home. 🙂

i actually took this picture at the chicago christkindlmarket. i didn’t take home any of the sheep this year–maybe next time. i hope your rocker-less horse is treating you well. 🙂

Thank you for this beautiful tale. It gives me a little hopeful ache in that part of my heart that is awake to magic. I wonder where I might find 1 (or 6 or 12) little sheep of my own…

It’s still looking at me.

I was having a really bad day, until I read this. Thanks for the super short tales that cheer me up more than some entire books do.

I once bought a pair of storyteller earrings, silver posts, from an old woman who said they’d been around for a long time waiting for someone to notice them. Whenever I wear them, they whisper in my ears; it tickles.

Of course! The sheep know our secrets! It all make so much more sense now.
Seriously, this is lovely.

Sheep can be very gloomy, but they are always wistful. As if wishing for a better day, or a better body to live in. Toy sheep are another story of course, but you still captured the inherent wistfulness of sheep. Yes, I do think about sheep…. Sometimes I feel strange to myself.

Aah, I love this story!! So fantastic and creative and random and magical!! <3

Thank you for this story. I needed it.

Damn. Girl with the pink hair was pretty stupid to pass up coffee with you! 😎

Delightful. Your stories make me think and also smile, such a rare combination.