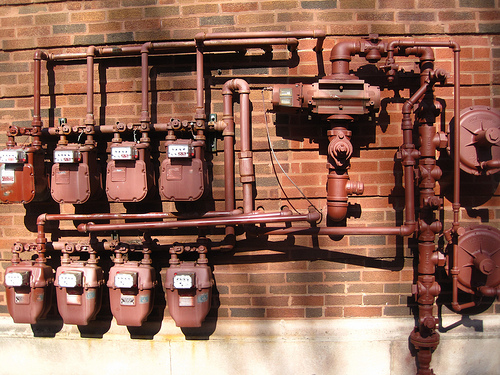 We were on the waiting list for almost six months before we got our new apartment. The realtor kept talking about the list as a positive, like the building is superior because it has a list.

It could be that it’s small or that people ask to live here for the sake of being on a waiting list, as though a building you can waltz right into simply isn’t as cool.

The building is actually quite cool, though, with lots of brick and odd corners. The kind of building you’d be wary of playing hide-and-seek in because you might never be found.

Technically I don’t think I was supposed to be in the fenced-off part near the back gardens where I found the tangle of pipes and meters that would have been practically invisible against the brick in the shadows but I happened to be there when the sun was falling just right to see them clearly.

At first I thought it was some sort of plumbing or heating thing, the meters were labeled so I found the one for our apartment and the display said Moderate Contentment – Acclimating with the little arrow pointing towards the top.

I checked a few of the others and they said things like Mild Annoyance – Passing and High Contentment – Maintaining.

I asked the building manager about them and he called it a “Monitoring System.”

He just smiled at me when I asked if he ever needs to make adjustments.

I love Friday, because I get to read another magical gem from Erin. These truly are better than most “books” I see my coworkers read!

I’d love to have all these stories in a little book to carry around with me. I love reading them 🙂

hm, wonder what he’d find at my house?=)

Hi Erin, I love your flax-golden tales! I wrote a post on my blog (theliteraryprincess) about spontanious writing and used your tales as a great example. I hope the idea of writing short will make it more accesible for beginners to write and of course more fun too. I even published a tale myself that is inspired by your awesome novel. I loved The Night Circus sooo much. It instantly made it to the top ten of my all time favourite novels. I could say a lot but for now I would just like to say: Thank you so much for writing that novel!

I was thinking the exact same thing Mandy! It would be really amazing if they made a book of all Erin’s friday stories. That way I could always have them and flip to my favs automatically. Maybe they will eventually it is a good idea.

This one’s my favorite so far

Just wanted to say thank you for your wonderful prose! I just finished Night Circus and had to look you up. And to my delight I found your site. Monitoring systems…Night Circus…recurring theme but equally delightful. I wonder who is pulling my strings…but whomever that is I thank for having my path intersect with your gift!