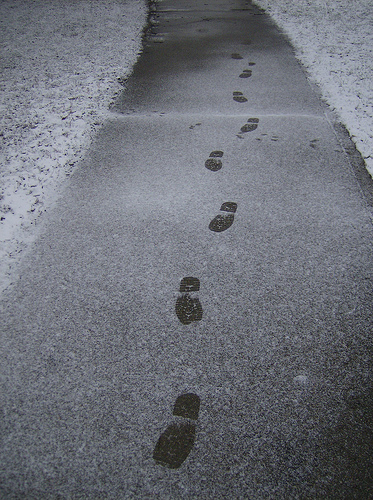 of impractical footwear and inevitabilities

He started walking on a Tuesday.

It wasn’t snowing when he left but the flakes began to fall within hours of his departure, as he knew they would.

His shiny leather shoes were not well-suited for the weather, but that did not deter him.

He kept a steady pace as his shoes slowly lost their shine, and his toes grew colder.

He never looked back. Not once did he turn to see the line of footprints that marked his progress, though they never lasted long.

But that didn’t matter.

He knew it would catch up with him eventually.

Ooooh. Shiver down my back.

Eerie and lovely. I love the photo, too, how clean the footprints are. 🙂

I love this tale.

I feel cold in a 70 degree room. This tale actually chilled me.

Eerie and lovely; great mood developed in such a short space. I love a piece like this that invites my imagination to mull over the possibilities and wonder –> what “it” is that will eventually catch up to him? Bravo for another intoxicating short!

Oh how I wish they were longer! Yes, I know it would take away some of the charm. It’s a good thing to want more and to wonder where the story may lead or where it came from. Amazing job as always!