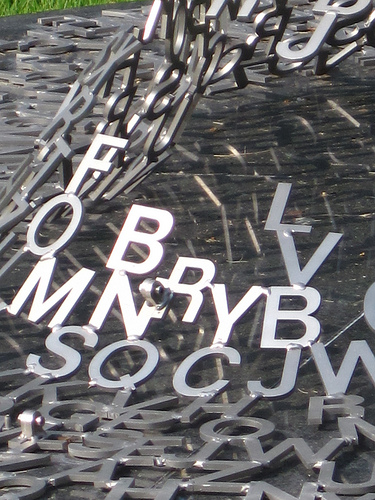 It’s the easiest way to compose a poem, he tells me.

I don’t believe him, but I nod in what I hope is a thoughtful-looking way as he throws the letters up into the air. I make a silent mental note that he used the word compose and not write.

We both watch as the letters cascade to the ground in random patterns: a W overlapping an R, a zig-zag that could be a Z or a sideways N.

An O joins an M for a momentary meditation before they separate again.

Once the letters settle they’re all nonsense and I can’t find any proper words.

I try to tell him that I’m still not sure I understand how it’s supposed to work but he shushes me, already scribbling in his notebook.

I stare at the pile of letters, searching for words though there aren’t nearly enough vowels.

There’s a B next to an R with a Y that reminds me of a girl I once knew named Briony who laced her shoes backwards with the bows near the toes.

And now I think I get it.

Beautiful. Your writing is so fresh, you see life with a sort of wide-eyed wonder. I always enjoy coming across your links on Twitter because it’s like finding a little treasure in an antique shop. Surprising yet, on second thoughts, expected.

Ooooo I love this — so much packed in such a small story.

You know, you could really do this with Scrabble tiles… not a bad idea, really.