flax-golden tales: another place in another time 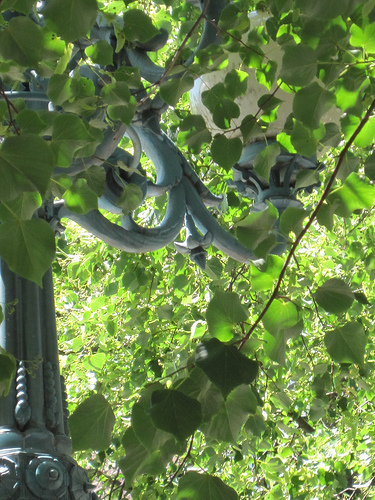 another place in another time

I found the lamppost in the middle of the woods, half-hidden in branches and vines.

I confess, the first thing I thought about was Narnia even though it was summer-warm with green leaves instead of wardrobe snow and I’m too old to be thinking such things in serious wishful ways.

I untangled what I could to get a better look at the lamppost itself, which was set securely in the ground even though the nearest road was half a mile away.

I’m not sure when I stopped being in my woods and started being in Everglynn, but it was probably somewhere around dusk when the lamp flickered on and the chipmunk sitting by my feet asked if I happened to have the time.

It’s not Narnia, not by a long shot. No icy queens or wise enigmatic lions, just a messy, run-down land of squabbling creatures who argue over everything from what to farm and how to form a proper army—though I’m not sure who the army would be fighting, there aren’t any other lands as far as I can tell—to what books to keep in the expansive hollow-tree library and whether or not to legalize gambling.

They think I’m their savior, a strange beast sent from another land to fix their unruly society and their failing economy and bring peace to their vine-tangled forest.

I try to help. I untangle what I can. I worry what would happen if I were to leave.

I love your words and how you write. Hope you have a great day!

I love the picture and your story is perfect. You have such a way with words. I love it!

I will never be too old to think such things in serious wishful ways. Neither will you.

I cannot believe these tales are only ten sentences long. They’re so rich. It’s impossible. I always end up counting to make sure.

If I ran into that lampost, I would think of Narnia as well.

Loved it! Absolutely magnificent!
I love the small tinge of fear at “what would happen?”
We’ve all felt that at least once in our lives. Sometimes in relationships, sometimes with jobs or businesses. Your stories are not just ‘Verbal Paintings’ for they encompass all the senses found in the imagination. I could ‘see’ the chipmunk, ‘hear’ the buzz of the light as it came on through the rustling of the leaves, and even smell the wood/lichen/grass/leaves that surrounds the central character.
C’est Magnifique! I once wanted to write like you, now I only wish to read more since I could never match you.
I suppose I am a ‘Rêveur’. Not just of the circus, but of all your writing!
Thank you for sharing your skills with us!

Your imagination and magical choice of words gives us old, frustrated, unpublished writers a glimmer of hope.
Never give up!