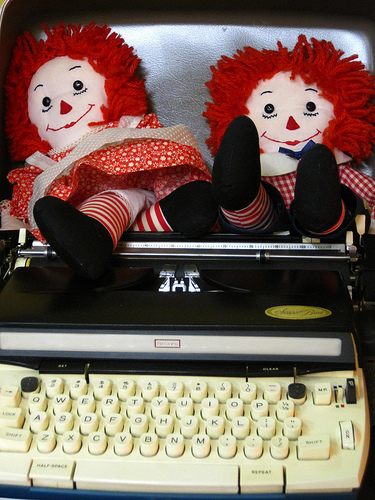 What are you doing? they ask in earnest, curious unison.

Writing, I reply, answering automatically even though they ask the same question every day and they often sit directly on the typewriter so it should be rather obvious.

Writing what? they chorus with their typical giddiness.

There should be a bear! one suggests.

No, bears are scary! the other insists.

You’re not helping, I tell them, but they don’t listen. They never listen to me.

They argue about bears and relative levels of scariness (digressing into a lengthy debate as to whether dragons could be scarier than bears and who would win in a dragon versus bear situation, including caveats as to age of dragon, type of bear, landscape the fight is taking place on and both competitors psychological motivations) and what makes a story properly good while I continue to type.

Such smart muses! I love your stories and always look forward to reading them on Fridays. Have a good day!

As always, loved the tale. Fridays have taken on a whole new spirit now.

I read night Circus last Winter; it blew my soul and my mind away but, more importantly, it also numbed the chagrin i was feeling at the time because it occupied so much place in my dreams and imagination.

I’m lucky enough to be able to read books in English, though i am francophone… however, my partner does not share hat ability. Will Night Circus be published in French eventually? I know an independant publisher who’d jump on the chance of publishing it French, if no one has considered it yet…

Hello Rose, the circus will be published in French by Flammarion, I don’t know the exact release date but I did recently see a preview of the cover so I imagine it will be sometime soon!

I love the dolls, the details, and the whimsical twists. Another gem!

Well, I was “taken” with the magic aspects of the book. In portuguese I could say more end better…anyway I would like to say thank you for the beautiful story.
🙂