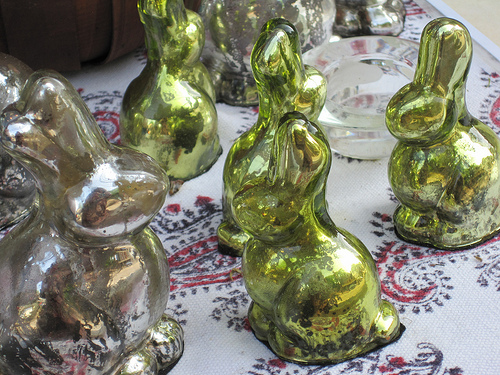 We moved the table to the back of the store years ago but once in a while interested customers still come in and my dad points them toward the end of the long polished oak counter and around the corner and then he presses the button that lights up the fading fancy-lettered Lapins sign and dings a bell by my desk so I can unlock the case.

I sometimes wish we could just leave the sign on and the case unlocked so I could do something productive, since most of the time the potential customers are only browsing and they get grumpy when I inform them that they can’t handle the merchandise without displaying what they have for trade.

No one has lapins for trade anymore. Not nice enough ones to trade for our stock since all our lapins are in prime condition for their age, still shiny and mostly in the pale green the official catalog calls “celery” and silver, which is just called “silver.” Once we had a pink (“amaranth”) one but a woman I’d never seen in the store before swooped in with a wide-brimmed straw hat and a huge purse the day after we got it in stock and traded three green ones and a still-wrapped cerulean for the single pink. After she left my dad grumbled and suggested that we could have held out for a better deal, but there was no way I wasn’t letting that lady have that pink bunny, not with the look in her eyes under the shadow of that hat.

But most of the interested customers we get aren’t as serious, even though we’re the only store in this part of the country that deals in lapins anymore. I’ve mastered the headshake of disapproval when people produce lapins for trade that have clearly been tampered with, serial numbers illegible and ears crudely reattached.

“The lapin business is still a noble trade, son,” my dad says, even though I’m a girl (he always calls me son anyway) and both of us refer to it as “the bunny business” on a regular basis.

Sometimes I suggest we crack them all open and be done with it, but I never really mean it and I’m always relieved when my dad shakes his head and pats the display case, aiming a tiny smile down at the lapins safely locked under glass.

I now find myself terribly intrigued by this trade of shiny bunnies. What is the value of a mint condition cerulean lapin?

I love the wealth of details — the shadow of the lady’s hat, the “son” for the girl, the colors, the gestures. What a treasure!

Oooh, I like the green ones! Wonder where they came from? What’s with all the glass bunnies? Where are they, really? Also loving that vintage tablecloth underneath…

Have a great weekend, Erin! 😎

A newcomer to your work, I love this flash fic. It whets the appetite, and taps in to many different universal emotions. The sense of monotony in a routine, frustration at lookey-lous, and the shared secret of enjoyment between the narrator and his father. Great stuff!

I was just reading you ‘FAQ’ and it said your birthday is on the 8th day of July, so I wanted to wish you a Happy Birthday as well!

I love this tale. I found myself thinking about the lapins and the characters long after I had clicked away.

Happy Birthday!
In case you didn’t know, the Fluevog website is having a big sale.

Happy Birthday and thank you for The Night Circus and these little gems.