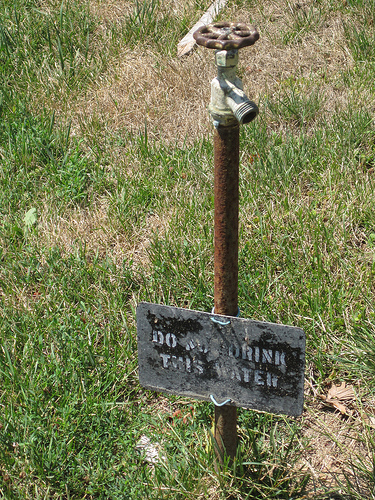 There was indeed a warning sign, as people mentioned repeatedly after the fact.

In her defense, it was difficult to read.

The sign had once been clear and foreboding, though perhaps over the years it tired of its assertive manner and as fewer and fewer people passed by to read it stopped trying so hard.

And perhaps it is only a coincidence of erosion that the letters spelling out the key word “not” were the first to fade, leaving “do” and “drink” and “this” and “water” mostly legible.

(If it was a purposeful deceit, the sign will not confess.)

But whether she followed the legible instructions instead of the original posted warning or simply didn’t notice the sign at all and drank to quench a thirst, she can no longer say.

Her own voice is gone, vanished as soon as the water–clearer and crisper than any she had tasted before–touched her tongue.

Now her head is filled with thousands of other voices whispering secrets and confessions, answers to unsolved mysteries and long-lost truths since replaced by lies.

The authorities (likely the same ones who posted the sign so long ago) put her in a locked room while they decide what to do with her.

She continues to clearly indicate that she would like a pen, but they are all too afraid of what she might write.

I want more of this story.

Loving these little shorts, Erin! Great writing, and, I am sure, a great exercise! I may have to adopt this idea just to stay fresh! Lol

Loved it. So intriguing. I wonder what she’d write.

How is she going to change the world with the words that she now knows but is unable to speak? I definitely want to hear her speak her truth.

I must tell you I’m incredibly disappointed and heavy hearted to find this is not a book….I hope I can say YET ??? Like Mandy says above, I really want more of this story too ! If you opened a book like that, I highly doubt I would be able to put it down….

I’m 3/4 of the way through Night Circus and loving it….it brought me to here to find out more about you and your other work…I can hardly wait to see what else you come out with !

Sometimes she is me.

“Now her head is filled with thousands of other voices whispering secrets and confessions, answers to unsolved mysteries and long-lost truths since replaced by lies.”

Brilliant! I think this is one of my favorite flax-golden tales so far. I love the depth, and can visualize this inadvertent seer, waiting for her pen . . .

It could always be a pencil what’s wrong with a pencil?

A pencil’s marks could be erased again and “replaced by lies.” In this particular case, a pen is probably the safer bet.

All your flax golden tales are AMAZING but this must be one of my favourites. That trickster sign! I love it. What I would love even more would be your entire collection of tales assembled into a published book. Is there any hope for a publisher to see the light and produce that?

I loved it, Erin.
I just read The Night Circus and it was something special and different from anything else I have ever read.
Enchanting!

Hi! I must agree with Faith, it would be amazing to buy a book named ”Flax Golden Tales” by Erin Morgenstern. You’re FANTASTIC Erin, your writing inspires me and I love your creative mind!

These get better and better! Truly! My compliments to the photographer as well.