flax-golden tales: a time machine is not a clock 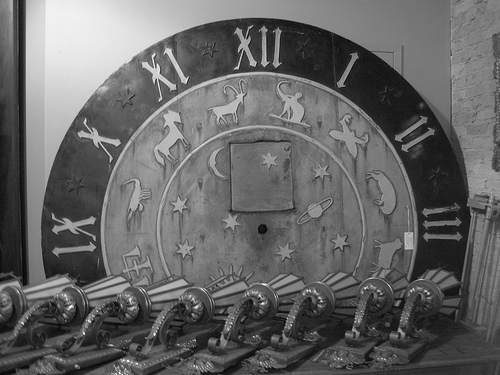 a time machine is not a clock

Everyone thought it was a clock, but everyone was wrong.

It had numbers, large ones of the Roman variety arranged in a circular fashion which gave it a clock-like impression, but it had no hands, a fact no one noticed until it was fully assembled.

It arrived in pieces without instructions.

It stayed in pieces for quite some time before someone suggested putting it together.

After the layer of dust was removed it did not take as much time as anyone expected to restore it to working order, and they wondered afterwards why they had let it sit abandoned so long.

(Truly, it had been there for such a time that no one could recall where it came from.)

The lights seemed decorative in their excess: scrolled sconces with delicately paneled glass shades, though each lamp was in fact vital to proper function and calibration.

The most difficult part was aligning the lights with their proper astrological symbols, as the lamps were not labeled but would not illuminate unless they were mounted near compatible signs.

Once all the lights were happily aglow and the missing hands were noticed they stared at it in mild confusion and annoyance at the refusal of what they thought was a clock to tell the time.

It was quite a while before someone realized that the square in the center was a door.

Ahh, this is amazing Ms. Erin! As always. Funny…I didn’t notice the square until it was mentioned. ^_^

Oooh, is there a photo of the fully assembled, lighted time machine? Neat story, has my imagination running!

Wow!! Love this one! I didn’t notice the door either, until the last line.

Pulls me right back into the beautiful magic of The Night Circus.