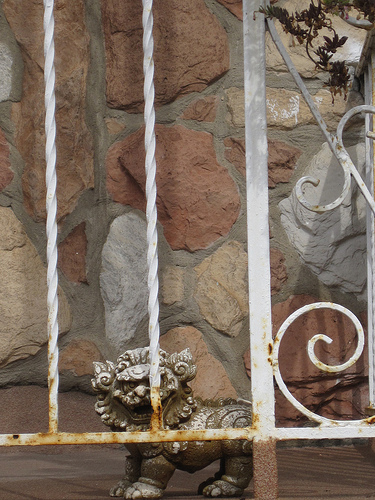 At first I thought it was a dog—a Pug, maybe—but now I’m pretty sure it’s a dragon.

I tried asking when it first appeared by the gate but it doesn’t talk, it only growls and coughs.

Every third cough or so results in a puff of dark smoke and once in a while the smoke is accompanied by actual flame, so it’s probably a dragon.

I invited it inside but it prefers to stay by the gate. I tried giving it water but it wouldn’t drink it, after a great deal of trial and error I discovered it will only drink dark roast coffee spiked with whiskey. I bring it a bowl full every morning, but I haven’t found anything it will eat yet.

I don’t think it sleeps. It paces all night.

I love this – thank you.

Is it wrong to think that teeny tiny dragon is cute?