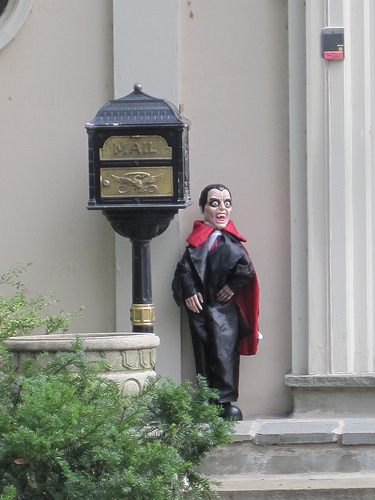 The mailman noticed the vampire before I did. He mentioned it to me when he delivered a package that needed a signature. He said it was a small vampire, probably nothing to worry about but he thought I should be aware.

I thanked him but I didn’t really believe it until I saw the vampire myself, standing outside in a black and red cape.

He is a very small vampire, maybe about two feet tall. He lurks around the mailbox and occasionally tries to reach inside but he’s not tall enough.

The sunlight doesn’t seem to bother him, but if I open the door when he’s there he hisses like a cat and disappears into the shrubbery.

I decided to see if he was actually trying to steal the mail so I “accidentally” dropped an unimportant letter on the ground and went back inside to watch him through the window.

The vampire creeped out of his hiding place and very carefully peeled the stamp off of the letter.

He took the stamp and disappeared back into the shrubbery and I haven’t seen him since.

He looks harmless enough…
What a fun story. I enjoy your writing immensely.
Glad Life is not quite so busy for you now. Have a great weekend!

That’s cause he’s a stampire.

I was hoping that the suspension of comments was not retroactive, because I needed to say that you are loved, and admired, and that it is very frequent for people who excel at expressing thoughts and feelings and images and spirit and magic to be less eloquent when comes times to speak. The words come from inside your heart and soul, and sometimes, the voice is not powerful enough to carry them. Their magic travels differently, in secret ways.