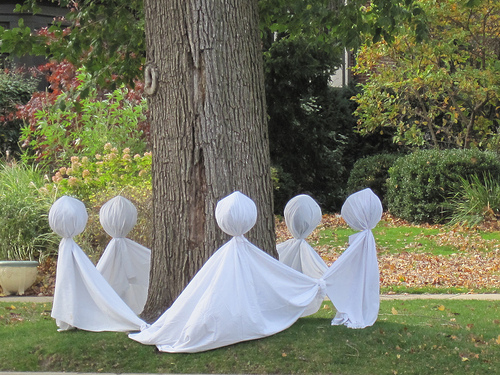 The house is one of those beautiful old types with creaking doors and long dark hallways that looks like it should be haunted but it isn’t. The realtor assured us as much when we moved in, even showed us the historic records. I think she did it mostly to prove there were no records of any deaths occurring within the house’s walls despite its age.

We didn’t have any strong beliefs about ghosts one way or another, so we bought the house more concerned with the plumbing and the electrical system than anything else.

In retrospect I wish we’d at least thought to inquire about the yard.

We started seeing them not long after we moved in. Little glimpses of bright white shadows caught through windows or out of the corner of eyes while on the front walk or out in the garden.

At first they’d disappear if they saw us looking, but lately they’ve been lingering and I have a feeling once all the boxes are unpacked and they know we’re going to stay a while they might ask us to play.

Oooo… 🙂 This made me want to re-watch “The Others”. Excellent!!!