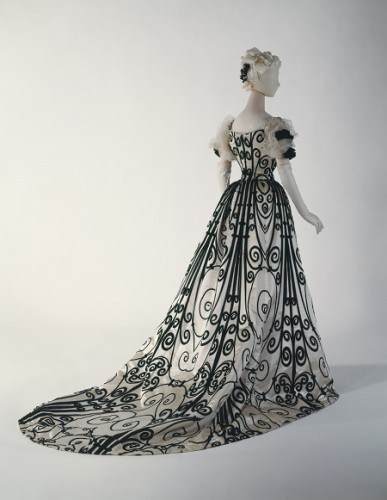 The series finale of LOST is on tonight, which you probably already knew unless you live on a deserted island without a television.

The awesome posters that were going around the interwebs way back at the beginning of the season are going to be available on abc.com. I kind of want the bunny one.

It’s weird to have something that’s been part of my life for so long come to an end. Six years is a long time. I watched the pilot episode in a teeny apartment in Boston on an equally teeny television what seems like half a lifetime ago. Since then I’ve gotten married, moved away, written a novel, painted a tarot deck. Tessa wasn’t even around for the premiere, that’s how long ago and far away it was.

The boy & I spent part of the cocktail hour at our wedding flailing about the greatest use of the Red Sox on television, ever, from the episode that had aired that week, back in Season 3.

And yes, I picked the polar bear photo for this past Friday’s flax-golden tale on purpose.

I doubt I’ll ever have this again. I don’t watch that much television. I certainly don’t watch that much television that keeps me theorizing and hypothesizing and occasionally flailing around like a fangirl. Like, I don’t buy tv stuff, yet I have Dharma shot glasses & I’m wearing a shirt with the numbers on it right now, even though I’m rather annoyed that the numbers themselves haven’t gotten a satisfying resolution yet. I suppose they have a couple more hours to explain.

I’m excited and nervous even though I’ve been kind of nonplussed about the last few episodes and I’m still mad about Frank. I’m making frozen pina coladas later. Soon there will be Hawaiian pizza.

I likely won’t be posting thoughts on the finale, because I know there are people who won’t be able to watch it tonight, or haven’t even watched the show at all and if you’re one of them you really should, I think it actually works better watched on DVD instead of week-to-week.

So goodbye, LOST. You’ve meant a lot to me even when I wanted to throw things at the TV. You had mystery and cleverness and bunnies. You are responsible for my massive crush on Michael Emerson. You made me laugh. You made me cry. (The latter I blame mostly on Michael Giacchino.) You always kept me guessing.

You’ve been a special kind of awesome. The kind that dares you to look death in the face and say, “Whatever, man.”

Thank you. I’ll miss you.

And revisions are done. Beta-ed, adjusted again, re-beta-ed & polished to a high shine.

It is almost disgusting how much better it is than the last draft. Seriously.

I’m not leaving the Revisionland Hotel because I have too many friends here and I like the bar. But I’m done. Done done done.

Sending the New & Improved version back to agents first thing tomorrow. Kind of baffled that I’ve finally reached this point.

Anyway, while I was unplugged last week I did mostly nothing but rewrite and rework and make good sentences great and listen to so much Pandora radio (Arcade Fire station) that I blew my 40 free hours for the month. Might have to invest in fancypants Pandora.

Y’all were also spared a rant about last week’s LOST. Um, I still love it like candy but that episode made me mad. Like, livid, throwing things mad. And not just because I love Frank. Sigh. Am nervous about the rest of the season. I didn’t think they’d be able to lose me at this point, but now I’m kind of concerned.

I also started knitting a new scarf, because nothing says spring like new scarves.

Not sure what I’m going to do with myself once this thing is out of my hands again. Reading & yoga, most likely. For now I have champagne sorbet.

The boy and I are LOST junkies, but you knew this.

We have a little bit of a bet going this season, regarding the identity of a certain character’s ex-wife.

This is the wager: 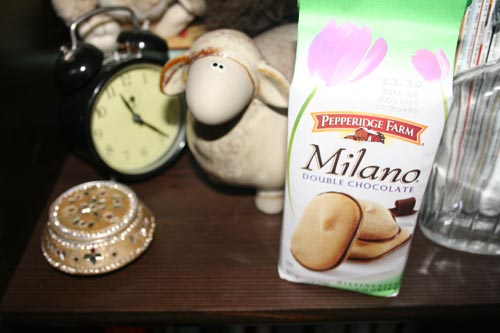 If I’m right, I get the entire bag of Milanos.

If I’m wrong, he gets the entire bag.

Why Milanos, you ask? Because earlier this season in a relevant episode a character opens a bag of Milanos and only takes one cookie. Seriously, who does that? Only one Milano? Milanos are like, cookie heaven. You take the entire shelf if you’re not going to just succumb to eating the entire bag. One solitary Milano cookie is a sad, sad thing.

The only problem is we have no idea when the answer will be revealed. We’re probably going to have to hide the bag.

We went to closing night of Sleep No More on Sunday. I stayed away from the main plot this time, I think I only saw the Macbeths proper once or twice. I wandered through bits of Rebecca made more enchanting by having recently watched the Hitchcock film. Hecate was once again quite fond of my jewelry and this time she pulled me away for private storytime. I saw scenes I’d somehow managed to miss the first three times. It must have been virtually impossible to see everything, and I think that’s part of what made it so magical. I will miss it terribly. Thank You to Punchdrunk & the A.R.T. for such an incomparable experience that I was lucky enough to have four times over, though thank you only begins to encompass what I mean.

Remember how I said I was going to try to have a revised draft of the novel done by my return to Manderley? That was lies. I have a lot done, but it’s nowhere near finished draft proportions. I’ve given up on deadlines, as much as they make that lovely wooshing sound when they go by. Still typing away. Putting word after word and adjusting page after page and hopefully eventually I’ll reach the end.

I tried to come up with things to say about last week’s LOST premiere that weren’t spoilery or convoluted, but really it just boils down to three things:

Looking forward to seeing where they go from here. Still trying to get used to Tuesday being LOST day, too.

Still mostly all Revisionland, all the time around here. We escaped the snow this weekend but apparently it’s getting back at us tomorrow. Will be hibernating. 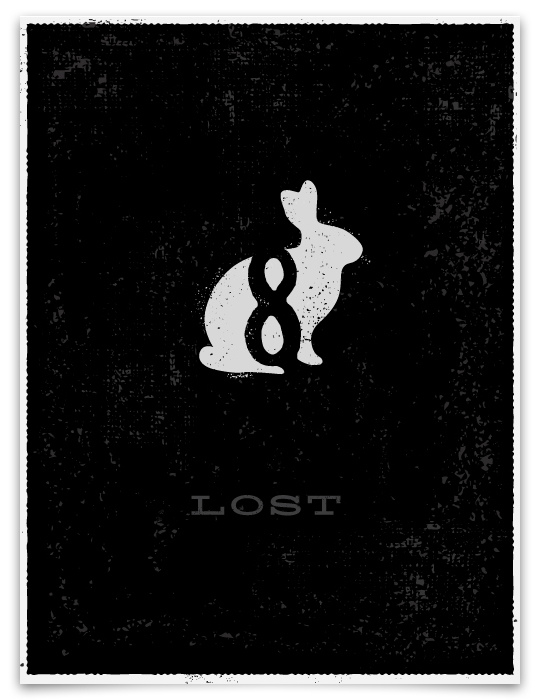