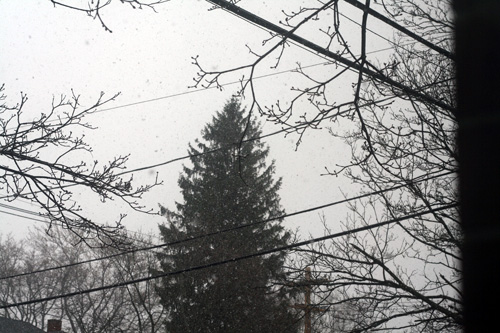 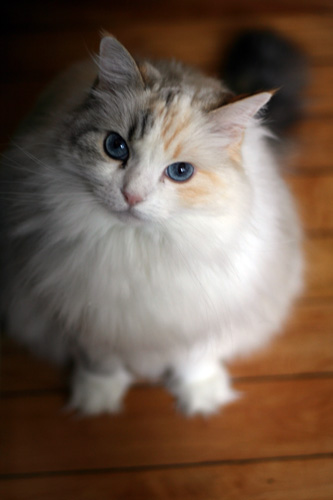 It is raining. Or hailing. Or some other sort of frozen rainesque thing that is turning all the fallen slow to heavy wet slush.

I should probably invest in some new boots.

For now I am hibernating, in the warmth with my tea and a pile of new books.

I am slowly but surely getting into the swing of 2009.

We got ourselves a Wii Fit for the holidays and started it up on January 1st. It’s nice to have a way to exercise that doesn’t involve going out into the slushy snow, and I like the format and routine. Perhaps it’s the kindergartener in me but I enjoy being able to stamp a date on the calendar and get credits for minutes. Simple rewards, gold stars for good behavior. They work, though. Everyone likes a star.

Back to reading and listening to the freezing rain cascading down the side of the building. Am mid-way through Kelly Link’s Pretty Monsters and have Tana French’s In The Woods to pick up when I’m finished. Am going to endeavor to read more this year, and keep better track of what I’m reading, too.

Now, if only kittens were sleepy or snuggly instead of running around like maniacs it would be a very cozy afternoon.

It’s raining again, thundering and dark. I have lived in Massachusetts all my life and I don’t remember ever having a summer this stormy. I do love a summer storm, but this is kind of insane. It is nicely moody, though, even when the thunder frightens the kittens.

I made a chart for the novel. I mentioned this already, but I like it so I’m going to babble about it more. It’s not a chart, exactly. More like a big page of color-coded lists of vignettes with a timeline below it to keep everything in order.

No lightning, though, at least as far as I can tell.

I like my chart. I’m not usually a chart/notecard/etc kind of girl but this is kind of helpful and makes finishing seem a lot less daunting. Only 12 vignettes are really unfinished, and only maybe 10 more need heavy rewrites. Out of 42 or so. That’s no so bad. I keep saying this, so it must be true.

That one was loud, the kind of thunder that actually sounds like cymbols crashing. I think the kittens are getting used to it, this one didn’t even make Tessa blink.

I hung my chart up over the iMac, so I can just look up and refer to it while sitting at the desk. This seems easier than going through notecards or whatnot. I already have a file open for the 12 vignettes that need writing. I have at least a few hundred words and notes for each of them, which will help. I am hoping to have drafts of all of those by the end of the month, which should be doable.

It’s really pouring now, past the rain stick sound because the noise is just continuous. I am resisting the urge to go stand out in the rain, it’s a bit too cold for that anyway.

This blog is one month old today.