I have a small windowless office. Over the last few months it became more of a place to put things I didn’t want to deal with than a proper space to work in, so yesterday I made a lot of coffee and locked myself inside not quite with the goal of organizing, really, but in an attempt to clear out some of the mess and make it a more habitable space. I had aspirations of coziness. I put on my “Early Jazz” Pandora station for soundtrack purposes. It could still use some work and I need to go through all of my files and things, but I think as far as overall habitable/cozy I was fairly successful. 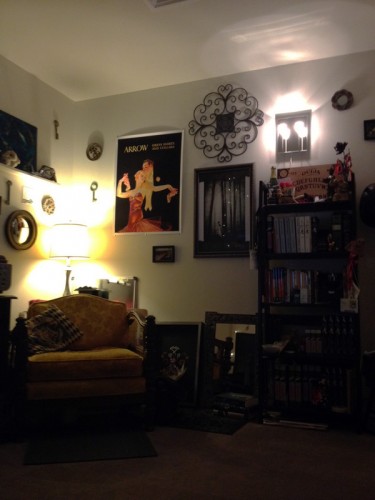 The floor was covered in piles of stuff, I really should have taken a “before” photo. Lights are both new to this room, I switched out the floor lamp that had been too bright for a lamp and a mirrored sconce and while it’s not hugely bright in here I’m usually at the computer anyway so I think it’s sufficient. It makes it more atmospheric. Almost everything on the walls was put up yesterday and there are still a few spots that need something but it’s a vast improvement.

The desk side of the room isn’t quite as cohesive yet, there’s also an oddly shaped nook behind it that really seems to want a tree or something. Maybe when I have time I’ll make a paper tree to loom in the corner. 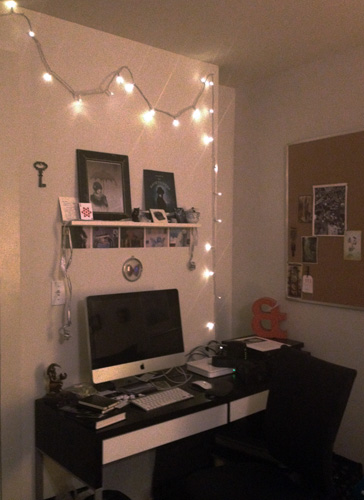 So I am typing this from my much cozier yet still small and windowless office. Also, I think because it is windowless it stays toasty warm, I think it also gets heat from the hallway. Methinks I will be spending a lot of time in here while I’m at home this winter.

Also, this made me giggle delightedly: 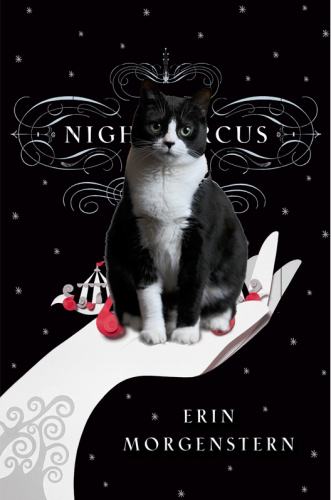 Roswell in the circus! On the circus? Either way, I love it and you can click it and go read all the splendid stories that Kyle Cassidy’s blog readers came up with, circuses and clockwork and a truly splendid cat.

Am in housecleaning mode, both with the apartment and in my head. Getting ready to go out on my January mini-tour next week. This afternoon I took a walk in the snow and sunshine at the same time.

Now I am going to drink green tea and think thoughtful thoughts and possibly read.

I love your newly refurbished, highly atmospheric office! Definitely cozy, and could double as an absinthe den in a pinch… which is always handy.

Ooh, don’t you love that feeling when you take a messy, cluttered space and clean it up? So lovely!! Your office does look like it would be quite warm and cozy and atmospheric. 😉 Perhaps you should put a Wishing Tree in the oddly-shaped nook…

Also, that cat is absolutely adorable, and matches the circus perfectly!! Such a cutie!! <3

i’m in love with the big ampersand. that’s cool. 🙂

Hi,
Just finished your book. It had so much in it. Memories, smells, tastes and more. Lots more. It reminded me of living some of my own dreams in Cambridge in 1977. Come and read in Dublin. I am sure you would love it here.
Colin