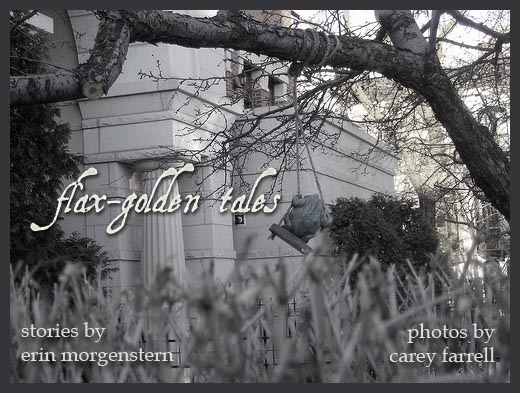 Each flax-golden tale consists of a photograph by Carey Farrell accompanied by an original ten-sentence short story by Erin Morgenstern.

They were posted to erinmorgenstern.com on Fridays from July 2009 to July 2014. There are 261 tales.

All flax-golden stories can currently be read here.

Erin Morgenstern is the storyteller, weaving little bits of word whimsy and sending them off into the wilds of the internet with photographs to keep them company. She also writes novel-shaped tales, paints pictures, collects cocktail recipes, knits at a mediocre level and burns easily.

Carey Farrell is the person behind the camera. When not being a photographer, she is a singer, a writer, a redhead, a pirate, a guitarist and a pre-school teacher. Not necessarily in that order, and usually not all at the same time.  She sails the windy seas of Chicago, and elsewhere on the internet you can find more of her photographs on Instagram and on careyfarrell.com

Just wanted to let you know that I’m teaching a Community Education course in fairy tales next semester and plan to have my students read some of these flax-golden tales alongside the Shakespeare, H.C. Andersen, Perrault, Karen Russell, Angela Carter, Gene Wolfe, A.S. Byatt, Yeats and C. Rossetti. Thank you for writing them.

Hi Jason,
I’m wondering if you could tell me more about the fairy tales course you taught? I’m in the process of creating a fairy tales language arts unit for my students for this year and would love any help I can get in terms of materials, resources and suggestions. If you have any you’re willing to share, please email me at vanschyndeln@hdsb.ca. Thanks!

I adore these short, whimsical tales. Each one is a little nugget of beauty. I look forward to reading many more in the future. 🙂

I found you through NaNoWriMo and was attracted to your awesome little email motivating us all to write, write, write.

I am not a novel writer. I am a writer nonetheless. That is the first time I’ve said it “out loud.” haha.

Anyway, this Shel Silverstein poem is something I painted around my dining room walls when we first bought our house 17 years ago. Its still there, though it is now the living room, or “lounge”, as we have so aptly named it. We love to lounge on the comfy couches drinking coffee in the morning or wine in the evening. I love to sit there and write.

So thanks for this lovely little Shel Silverstein connection today. I’m soooo looking forward to reading your book! Congratulations!

Just wanted to say I hope you changed your last name because of S. Morgenstern of “The Princess Bride.” Did you?

I also wandered on to your site here from the NaNo pep talk. I think this is such a great idea, to have a 10 sentence short story based off of an image. What a great writing prompt! I hope you don’t mind, I’ll try it out myself 🙂 Always in need of some creative endeavors!

Hi Erin! I too wandered here from the NaNoWriMo peptalk. I loved the pep-talk, and I’m loving your website even more. I’m seriously considering splurging on a purchase for myself (eeh, gads, right before the holidays) and pre-ordering your book, it sounds like it’s right up my alley, as I too am fascinated with fairytales and magical worlds. What’s a girl to do, right? Anyway, thanks so much for your encouraging (and entertaining) words.

I adore your flax-golden tales, they are as if spun from sugar, delicate and sweet. But full of implications too, that make your mind twist and makes you procrastinate while pondering, as if trying to figure out how to eat that sugar-spun delicacy.

I’m afraid they’ll disappear, they have a dreamlike quality.

I got onto your blog out of curiosity after reading (and adoring–it’s my favourite book of the year) The Night Circus, and found these beautiful tales! Thank you for sharing them online for us all.

I would just like to say “The Night Circus” is the most enchanting unearthly story I have ever read. You opened my eyes to a world of magic and mystery while challenging me to look beyond the obvious in life. I fell in love with the characters and their unique stories of how they came to be. This is the best book I have ever read and hope you publish another Novel very soon. I was hoping you already had a few out there because I chose to write about you for my literature class but this site has been very informative of who you are as a person. Please never stop writing because you have an ability to spin magic into words in a way I have never experienced before.

Thank you Erin. Randomly, I selected Night Circus from the library stacks (Random House audio book). Not since Fancies & Goodnights have I been so thoroughly captivated!! Your work is to be savored though it begs to be devoured. It is an intrinsic treasure.
Your Flax-Golden tales are little gems.

Your work is awesome! I love it!

If I ever thought of wearing anything other than black, white, grey or silver with a splash of shocking red I have changed my mind.
I am a Reveur to the end.
Brava!

Finished your magical book last night. I’m a middle-age English major and this is my first comment to an author; that has to signify something. The sweep and ease and nonchalance astounded me. Yours is a voice quite rare and your characters believable. You bravely took on a very difficult genre, perhaps easy to do, but very difficult to do well, let alone magically.

I would absolutely read more about Celia and Marco, Bailey,Poppet and Widget.

Some dark times in history after 1902. I know you “ended” the book, but hey, magic is magic.

Final thought: Where are the Posters and T shirts? Checked Amazon and nothing. A circus without clowns and no posters or t shirts? Bailey dropped the ball on this, for sure. I made an Iron-on of the cover, and put it on a shirt to help advertise your book at my kids’ schools. I gave two copies of your book to friends, one of them an English teacher.

Wrapping my scarlet scarf with a flourish, I remain,

Hey Erin! I read your book and loved it! You have the power of make the words be more than just words. The way that you put the one who’s reading inside the book is incredible. I’m tottaly a reveur! The only thing that i didn’t like is the fact that you can’t really visit the circus. But in my dreams i can walk around with Bailey, Poppet and Widget. I can eat chocolate rats and see Celia and Marco in the garden on ice. I can visit Isobel’s tent. I can use red gloves and feel like a reveur. Everything is possible. I’m waiting for the next book! I know it will be magical as ‘The Night Circus’

the book looks interesting, will check it out.

I have just stepped out of this enchanted world! I could smell every scent described…feel every chill in the air, every warm heated brightness! This was such a great way to spend my time after a long day- who needs tv???just a great book and an open mind:)- It is true magic to be able to feel and understand characters through words on a page.
Thank you for your hard and passionate work-

I have just finished reading The Night Circus – it truely was magical and took you away to another fantastical place. It’s how I imagined circuses of old would have been. Thank you for this beautiful book. I now look forward to reading your Golden Flax Tales and eagerley await your next book.
Kristi

I listened to the Jim Dale recording but also had the book so did both. The recording was so outstanding. What a performance. I loved the story. Magical. I probably didn’t understand all of it so will encourage my book club to have it as one of our selections so we can discuss! Thanks for writing it and continue to weave more tales!

My wife and I were going to Lake Garda in Italy for a holiday, I hurriedly picked up your book at the airport and from then on everything was magical ! A great holiday and your your fantastic book. It was a delight to read, seldom do things fall into place so well.

I adore your flax-golden tales, they are as good as I’ve seen. Please keep the content up and look forward to reading some more of the tales.

My dreams have invaded by a mystical tale and it happens without warning. Your writing is superb and took me to an enchanted land of good and selfish and heartbreaking longing and deep passion and insights into our true nature. I ached for Marco. and Celia. I cheered for Poppet and Widget and Bailey. I stepped into a land of utter fantasy and did not want to leave. “The Night Circus” is without a doubt one of my top 3 favorite books of all time. I will wait for your next novel with great anticipation. You are a true storyteller!

Dear Erin,
Few days ago I got “The Night Circus” (audio book) I thought it would be the perfect company for a 30-50 minutes commute to work… I never thought I would take the longest way home after work, so I could spend more time in the car enjoying the book.
Last night I told my children we would have a wonderful breakfast for dinner, so “mami” would listen to her book 🙂
This morning I woke up earlier just to have enough time to read (now I got the book in Spanish, my native language)… I have 100 more pages to go… and I almost don’t want to read it, because I am so nervous 🙂 and I do not want it to end…
Your book is almost like an enchantment… I love the magic of books…Thanks a lot
Daniela
PS, You are very very talented 🙂

Dear Erin,
I’m going to assume you get this which you may not , but despite that I love The Circus and it is my favorite book. I am a Reveur and hope to always be one . My fairytales are of dragons that lurk in the shadows at night and the castle that crumbles as the princess grins from the back of her knights steed. I want to believe it could happen even if my brain and or science tells me otherwise , thanks for envisioning everything I could have wanted in a story and making me fall even deeper into the love of reading.
Sincerely ,
A Reveur

I recently finished The Night Circus and couldn’t have been more swept away. I poured into every word and so badly wanted there to be more! A book hasn’t caught my attention this big for a VERY long time. Please write more of…everything.

Also, do you ever write flax-golden tales based off photos from your fans? I think that would be a fun venture. I fancy myself a pretty good photographer and would love to frame something like that.

With a scarlet bow wrapped in my hair,

Love this book!!! I need something else to read. Can you recommend something???

Great read!! Thank you so much. Please write more.