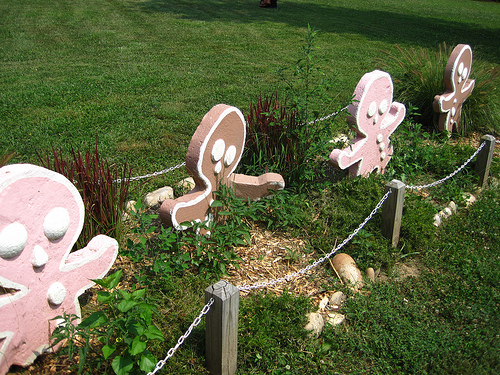 Momma said they wouldn’t grow, but I planted them anyway. They were my cookies that I baked all by myself. I could do whatever I wanted to do with them.

I planted them in the garden.

I watered them with tea mixed with lots of sugar even though it made the watering can all sticky.

It took a very long time and a great deal of tea, but they grew! First the heads popped out of the dirt and then the arms and then the chubby bodies with sugar buttons.

The birds tried to nip at them but I chased them away when I could. Though one day there were feathers stuck to some of the sugar frosting mouths and not so many birds around after that.

I wonder what will happen when my gingerbread army grows tall enough to climb out of the ground?