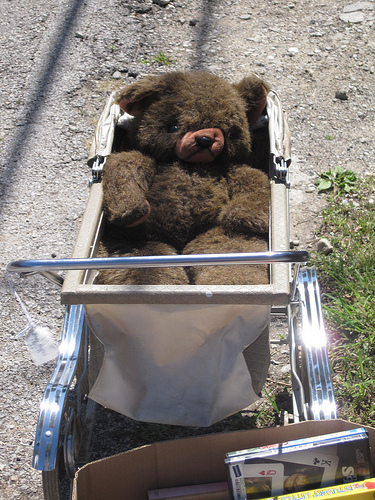 My little sister has this bear, this really grumpy looking teddy bear that she pushes around in an ancient baby carriage she found at a yard sale. She calls him Mr. Buggy Bear, even though I’m pretty sure she had the bear before she had the buggy to push him in, but whatever.

I had this really lousy day the other day and she insisted that I push Mr. Buggy Bear around. She said it would make me feel better.

Normally I wouldn’t be caught dead pushing a teddy bear around in a baby carriage, but we were in the backyard and no one was around and she seriously never lets anyone touch the bear or the carriage, ever.

So I pushed Mr. Buggy Bear around the backyard in circles while she sat and made daisy chains.

I don’t know how long I pushed him for; I kind of lost track of time.

When it got dark she put a daisy chain on my head and said Mr. Buggy Bear had to go to sleep and then she pushed him into the garage.

And you know, I really did feel better after pushing that creepy bear around. Weird.

My Instagram top nine was all #nightcircus10 all t