I have been completely useless. I keep squealing at people on the phone when I’m not rendered utterly speechless. At this point I think my agent would be shocked if we had a conversation that didn’t partially involve stunned silence on my part. I think I EEPed at him. That’s probably not very professional.

So I’ve been drinking tea and wandering around the internet. I bought a pencil skirt.

And I’ve been reading through Allie Brosh’s brilliant blog, Hyperbole and a Half. Her post on being a failure at success is so me right now it’s absurd.

I am not coping well with this bit of success I seem to have come across.  It appears that my nervous system is having trouble distinguishing celebratory excitement from extreme danger.

So yeah, me in a nutshell right now, only not as blonde: 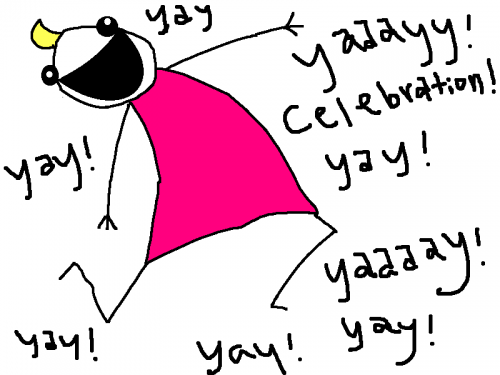 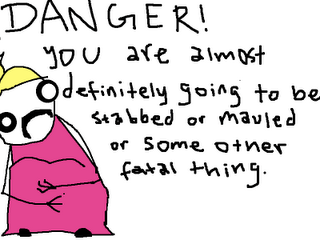 I go back and forth from hysterical giggles to near panic attack. I think the boy is concerned.

I almost don’t want to post this. I want to appear all calm and cool and collected but I’m totally not. And I figure the best thing I can do is just be honest. So yeah, I’m squealing at people on the phone. A lot. I’m giddy with excitement but I’m also kind of nauseous and I feel like my life suddenly completely changed even though I haven’t left my apartment.

Amusement park ride metaphors would likely be appropriate. Maybe not quite roller coaster, but that centrifuge thing that spins you back against the side of a wheel while the world tilts out from under you? Yeah, that.

If I try to get off, I’ll probably just fall down. So I’m going to hold on and see what happens next.

Just reading this (and gazing lovingly at the illustrations) is making me giddy. Congratulations and Happ-EEEE thoughts to you!

Oh, I want to laugh except I don’t mean that in a mean way. I sooo understand. It didn’t hit me when I got my deal (it wasn’t your level of deal) and I really thought it wasn’t going to be any big thing, but…well, I was wrong. You just don’t know how you are going to feel until it happens and there’s no real way to prepare for it. I have to warn you that odds are it is just going to get weirder for you on out. Especially when the reviews and things start happening. It’s like, not only do you have the attention from the deal itself, now you get the judging of the work, from total strangers. It is an extremely disorienting experience.

For me, roller-coaster. Definitely.

Many congratulations, try to enjoy the ride, and hang on tight.

Oh, go ahead and laugh. I’m sure it’ll get roller-coaster-y at some point, once I get past spinny.