flax-golden tales: meetings about nonconformist trees to which the trees themselves are not invited 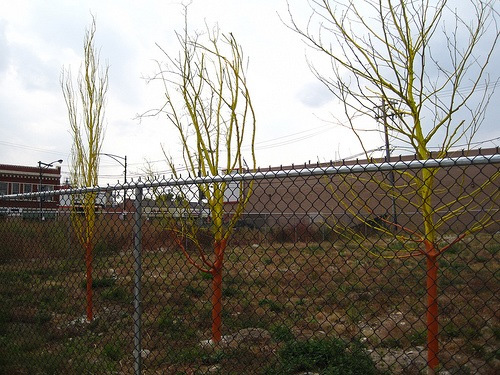 They grew from the ground that way, so anyone who suggested that it was creative vandalism or a trick of some sort was immediately dismissed for being uninformed or unobservant.

The meetings were held so people could argue about what to do about them.

Someone suggested they might not even be real trees, but no one wanted to get close enough to check.

One person was dragged from a meeting by the guards after yelling that they were a Gift from Above and should not be touched.

It was a topic of heated conversation afterward, over coffee and stale cake, whether he meant god or aliens, which led to a debate about which god, but not which aliens. Someone pointed out they were more likely a Gift from Below since they grew out of the ground.

There were a lot of meetings, followed by a lot of similar conversations and more stale cake.

Eventually, they put up a fence.

It didn’t really do anything, but most people seemed to find it a satisfactory enough solution to stop having meetings.

The trees still change colors, though.