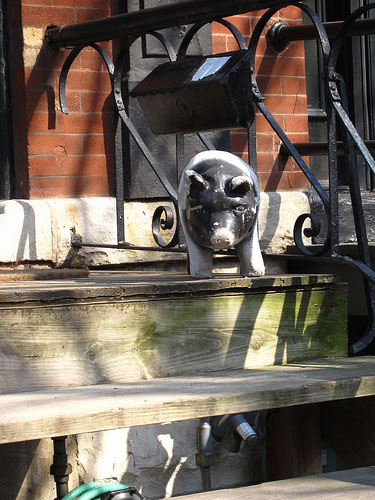 Every house on the street requires a protector, a fact that is bolded and italicized in all of the paperwork. Though if the reason is specified in there it’s been buried in small-font, legal-speak sentences and footnotes.

Each protector is different, I don’t think that’s a bolded rule, but I’m not certain and none of them are the same, standing or sitting or draped over front doors in their own particular fashion.

We moved in most recently, but our house is the oldest and it shows, the steps are worn and the brick has seen better days. The list of things to fix once there’s enough time and money just keeps getting longer.

Our protector came with the house. He’s seen better days, too, and for a while after we moved in I was kind of ashamed, since other houses have regal-looking lions or glimmering dragons curled around their entryways.

Until one of the neighbors (the lady with the golden-eyed owl perched by her own door) came over, bearing a welcoming platter of fruit tartlets individually wrapped in wax paper.

“You’re so lucky to have the pig,” she said as I let her in, and she looked so scared I didn’t dare ask why.

But after she left, I gave the pig a tartlet.