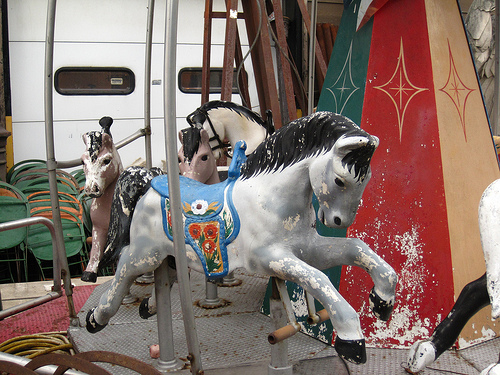 the storied pasts of carousel ponies

Once they were real ponies, because that’s how such stories go.

(Before that they were real boys, of course. Princes and paupers and a solitary thief, each with their own individual pre-pony story.)

It was a curse of some sort, though none of them would tell the same tale now were they able to speak of it. They were frozen mid-gallop and later, much later, there was music and lights and the delighted laughs and squeals of children.

It wasn’t so bad, as curses go.

Quite a few of them found it rather fun, unless the children kicked too hard. And even the grumpiest pony agreed that the feel of wind as they spun was decadent and wild, reminiscent of the real-pony days.

But the spinning and the lights and the music all ceased long ago, replaced by stillness and slowly fading paint.

Sometimes they hum tunes from various past lives softly to themselves as they wait for their next story.

Lovely. I love your writing, Erin. I read the Night Circus 2 months ago, found it at an airport bookstore and read it while I was in the plane. Couldn’t stop reading it. 😀 I hope it can be turned into a movie.

Would you happen to have an address we could ask you questions at? Like a fanmail e-mail add? Thank you.

They’re always real ponies to me.